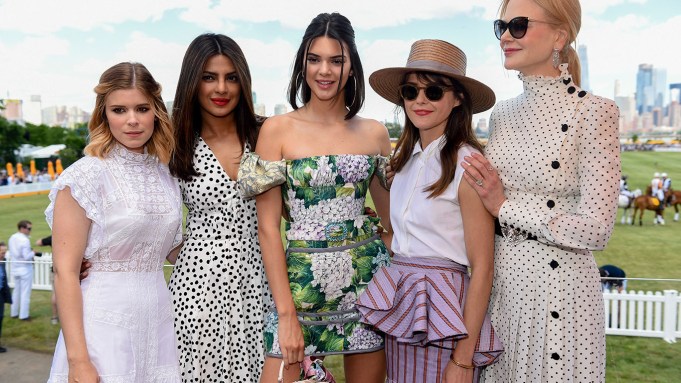 “It’s beer and chicken wings for the Super Bowl, but it’s Champagne and lobster for the Veuve Clicquot Polo Classic,” noted Nacho Figueras ahead of the annual event at Liberty State Park overlooking the Manhattan skyline Saturday. A decade ago the Argentinian-born player partnered with the French brand to bring the sport back to New York City for the first time since the Thirties.

“It’s a wonderful achievement and my next big goal is really to take this live-streaming [of the event] to the next level and hopefully get millions of people to tune in and thousands to show up,” he continued, brushing a hand through his tousled mop of brown hair.

For years, the daytime event has been the unofficial kickoff to outdoor summer events in and around the city. This year, the event did draw 1,000 more guests compared to last. “Hopefully, one day we’ll create something like the Kentucky Derby or the Super Bowl,” he added.

Guests who attended under general admission tickets were sprinkled on picnic blankets around the sun-soaked field and offered prime views of the game, which for many was merely an excuse to imbibe before nightfall.

“Veuve Clicquot had to give me a pronunciation guide,” joked event host Neil Patrick Harris as he welcomed Team Veuve Clicquot and Team Liberty Comets to the field just before Jordan Fisher belted out the National Anthem. Wearing head-to-toe Ralph Lauren, Harris noted his initial ignorance in dressing for the affair. “I’ve never been to a match and I wasn’t sure if it was more formal than it actually is. I was unsure if I would be underdressed in this and if I was supposed to wear a monocle or an ascot,” said the actor, who was joined by husband David Burka and their two children at a shaded table beneath the elevated VIP tent.

“I’m just hoping that our kids don’t get too interested in ponies because it’s a ridiculously expensive sport and you just end up with a box full of expensive ribbons,” he added.

Guests with exclusive entry were treated to a buffet of salmon, burrata, beef tenderloin, lobster tacos and, of course, free-flowing bubbly. “I’m more of a daytime drinker,” explained Freida Pinto. “I like sleeping and nighttime drinking disturbs my sleeping patterns so I prefer the daytime drinking and then you’re so tired and you go to bed.”

Seated at opposite sofas, Nicole Kidman and Kendall Jenner paid more attention to conversation with their respective groups of friends than to the sport being played, while Polo Classic veteran Gayle King wearing “an old Ralph Lauren dress” trudged through the densely packed furniture arrangement to take in views of the match in which Figueras played alongside wife Delfina Blaquier.

“We are always a family together — that’s how we roll,” said Blaquier, surrounded by her four children after the game. “Family is powerful and sexy and is the essence of who you are.”

Coco Rocha — who was sporting a new jet-black pixie cut from a Balmain hair campaign shoot in Paris last month — wore head-to-toe Fendi and admitted she had learned to wear thick heels to the event from past experience at the grassy locale. “I’ve come here in the thinnest heels and I fall in, so now I’m A-OK,” said the model, who was joined by husband James Conran and pals Christian Siriano and Brad Walsh.

Nicky Hilton in an emerald Monse sundress was joined by the brand’s founders Laura Kim and Fernando Garcia and observed how dressing for a daytime party is “obviously more comfortable” than an evening gala.

Also on hand were Lucy Hale, Luke Evans, Keri Russell, Matthew Rhys, Kate Mara and Priyanka Chopra, who donned a polkadot dress by Altuzarra, which proved to be on-trend as many female attendees purposely echoed Julia Roberts’ brown-and-white-spotted frock in the polo scene from “Pretty Woman.” Chopra, Kidman and Jenner — in p.r.’s latest control-freak tactic — were giving interviews to only pre-approved press, thus shielding the trio from the masses they were meant to be mingling with and turning their appearance into nothing more than a photo op.

As the penetrating sun sank lower into the sky, Champagne-soaked revelers poured onto the field with yellow-labeled bottles in hand for a short performance by Alicia Keys of hits including “Girl on Fire” and, naturally, “Empire State of Mind.”

“This is where I was born and raised and the city means so much to me,” gushed the singer, who wore a jumpsuit by Maria Cornejo and a Patricia Field jacket on which the word “boss” was repeatedly scrawled. “Veuve Clicquot has made a beautiful donation to my organization, Keep a Child Alive, and it’s important as we celebrate all the decadence and love and elegance that we also don’t forget there are so many people in the world that continue to need support and love.”

Ahead of her performance, Keys looked out at the eclectic crowd assembled before a breathtaking backdrop of lower Manhattan and the adjacent Statue of Liberty. “To look at the city and realize there are hundreds of thousands of people who have all kinds of backgrounds and [to know] we can all live together and learn and grow and have the same opportunities, it makes me want to sing so loud and strong and that’s what I’m going to do.”