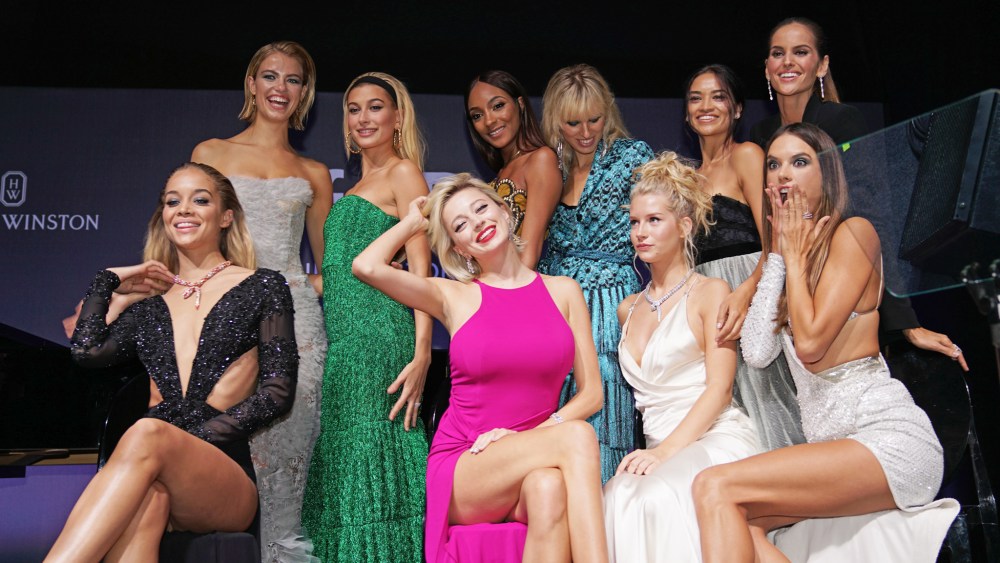 MILAN — It was ladies’ night at the amfAR gala in Milan on Thursday night, as the fashion industry turned out in force to celebrate the night’s honoree, Angela Missoni.

The designer dressed many of the guests, including her daughter Margherita, Karolína Kurková and Hailey Baldwin. Missoni herself provided a pattern-clash moment as she posed in front of one of the evening’s auction lots, a Fiat 500C car customized in Missoni stripes by Lapo Elkann’s Garage Italia Customs.

It’s proving a banner week for the creative director, who is celebrating her 20th anniversary at the helm of the family-owned brand, in addition to picking up amfAR’s Award of Courage in recognition for her commitment to the fight against AIDS.

“I feel old,” she said in mock complaint. “I’m really grateful and surprised, because I’ve seen so many relevant designers that I admire so much — they’re just not there anymore, they don’t exist, so I think I’m blessed.”

Guests playfully posed in the pink pussy hats that Missoni left on seats — a nod to her fall show, in which models donned the accessory symbolizing feminist protest. “I knew that in that moment I had a platform and my voice was louder, so I could use my voice for something that I really believe in, and I just went for it,” she explained.

Kenneth Cole, chairman of amfAR, noted the whole Missoni family — Rosita, Luca and Teresa were also in attendance — have been staunch supporters of its fund-raisers.

“They’ve been front and center,” he said. “They’re very iconic in the Italian fashion community, and they have a real point of view and they’ve stayed true to it.”

Clauson, fresh off walking in the Alberta Ferretti show, said she was looking to branch out. “I am starting my own ath-leisure lifestyle wear line, which I’m very excited about. I’m kind of starting more my own things and exploring outside of the modeling world,” the “Sports Illustrated” cover girl said.

Following a performance by Italian tenor Andrea Bocelli, American electro soul duo Lion Babe took to the stage. Arriving at the venue earlier, the band’s singer Jillian Hervey, the daughter of actress Vanessa Williams, said she was excited about playing the all-female The Other Festival next month.

“It just felt that it was really in line with everything we were already doing to make girls feel inspired,” she said, noting that their song “Wonder Woman,” produced by Pharrell Williams, set the tone for the band’s debut album in 2016.

“We’re in such a crazy time that women, and our ability to be empathetic and strong, and listen and really feel, that’s so important in the whole world, so I hope that that will just kind of resonate with everyone, and from there everyone will just feel more empowered to be more of a kick-ass woman than they already are,” she said.

One of the evening’s male guests has been doing a little ass-kicking himself: Nolan Gerard Funk, who has a recurring role in the upcoming sci-fi series “Counterpart,” is a former gymnast who demonstrates mind-boggling weightlifting skills on his Instagram page.

With a prior Versace campaign under his belt, the former “Glee” star appears in Swarovski’s new Christmas campaign alongside Dunn.

“I find that I have to work out for my sanity,” he said. “It’s just that lift of endorphins — you just kind of need it. As a guy, I have sometimes aggression, and the way that you kind of channel that is through lifting or CrossFit or boxing — a lot of grunting.”