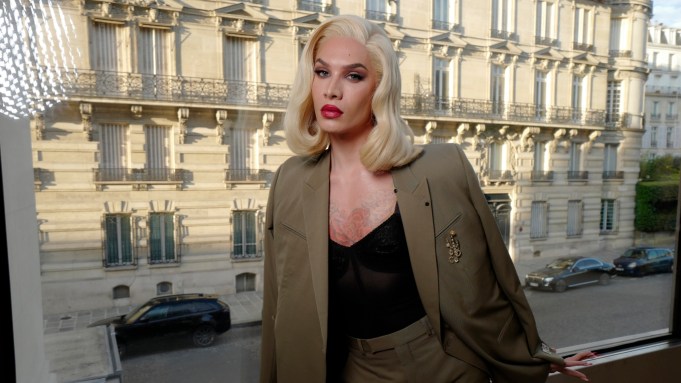 Walking into the tent that housed this season’s Dior show was like a breath of fresh air – with a seascape set and 19,000 plants in the small space, there was the distinct scent of spring.

Justin Timberlake and Jessica Biel chilled out with David and Cruz Beckham in the front row to take in Kim Jones latest men’s collection. After the show the idyll was broken, as guests tried to take photos and pose for pics while trampling through the (temporary) field.

“It was beautiful, as always, but this is madness!” exclaimed Naomi Campbell as she tried to make her way backstage. The model grabbed Nigerian rapper WizKid by the hand to lead him through the crowd.

Some guests decamped to the Dior store on Avenue Montaigne for an intimate cocktail in the upstairs garden of the flagship before being seated in the old apartment on the premises.

German actress Emilia Schüle, who plays Marie Antoinette in the upcoming CanalPlus drama, said she has a special connection with Dior. She worked with the house on some special dresses, and spent time at the designer’s home in the south of France. “That was amazing because you get a sense of what a true artist he is, with the furniture and the design of the rooms. It’s a fairy tale,” she said of the home in Grasse.

The cocktail was at the golden hour, and Miss Fame caught the light as she posed for pics next to the upper floor’s expansive window.

Fashion plays an important role in the “RuPaul’s Drag Race” star’s expression. “I feel it allows me to have a little bit of a golden armor,” she said. She loves a strong shoulder and nipped waist, but never down-gears from her glam. “My fashion identity has allowed me to access spaces that maybe historically I would have seen it as a child and thought, ‘How can I access that?’ Fashion allows me to tell stories and I believe that is part of our identity.”

Dior milliner Stephen Jones said this season’s double decker hats came together in a simple moment of inspiration. First he turned Bloomsbury Group painter Duncan Grant’s signature straw hat into a felt version, then played around with Dior designer Jones’ own baseball cap one afternoon during a fitting.

“But we’ve already done a baseball cap at Dior. So he said, ‘Put one on top of the other,’ and I said ‘That’s the look!’ It wasn’t some great anguished thing; it was in a way quite a simple trajectory,” he said.

Walking into the afternoon’s set, which was decorated with a replica of Dior’s childhood home in Granville, France, Jones was taken aback. He currently has an exhibit at the house’s museum. “I spent all spring there [preparing], so to see a miniature version of the house was like, ‘I’m home!'” he said.

Japanese actor Ryusei Yokohama was attending his first Paris Fashion Week and finding it “a little overwhelming,” he said. “The set was so beautiful, and the looks were not just fashionable and stylish, but playful.”

The “Your Eyes Tell” star said it makes him want to do additional projects with the house. Is there a capsule collection in his future? “No, no, no,” he laughed. “Just wearing.”

Afropop singer Rema just dropped his debut album in March. “I feel like the music is doing its job, it’s doing what it needs to do, it’s traveling,” he said of breaking Spotify records. “I just want to be part of, not only my journey, I don’t want just to tell my story, I also want to help people tell their stories.”

Ruger, another Afropop singer from Nigeria who just dropped his album a week ago, explained the inspiration for his song “Dior.”

“I just put out true music, and I wear a lot of Dior, I wear Dior Sauvage [fragrance] – it’s just Dior, Dior, Dior for everything,” he said. “It represents elegance and simplicity and at the same time it’s bold, very bold.” – With contributions from Joelle Diderich