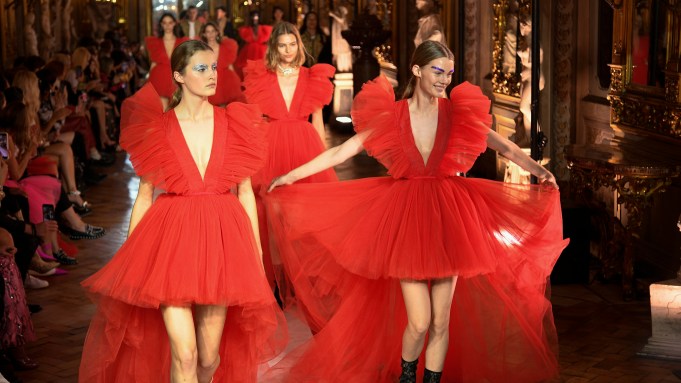 ROME — The deluge that caught Rome by surprise on Thursday night didn’t disrupt the detailed schedule of events Giambattista Valli and H&M staged to celebrate the complete launch of their tie-up.

Guests’ logistical efforts and tip-toeing among the city’s puddles were eventually repaid once they reached the lavish Palazzo Doria Pamphilj, where the first and core part of the celebrations took place with a fashion show. Connoisseurs of Giambattista Valli’s work may have been used to a few of the opulent locations where he stages his couture shows in Paris but the rich frescoes, golden furniture and abundance of 17th-century artwork at the Roman venue provided a pleasant step-up for a fast-fashion giant such as H&M.

“It’s amazing to be back in this location. This is where we filmed the campaign and it’s absolutely gorgeous, as ornate as the clothes that [Valli] designs, so it’s a wonderful synthesis of ideas,” said Cameron Riley Monaghan before the show. The American actor is among the talents fronting the advertising campaign for the capsule collection, which he defined full of “character and flare.”

“It was so fun, I was with H.E.R. and few other very talented musicians and artists. It was a fantastic experience with wonderful people, so the campaign turned out great,” he added about shooting the imagery and short clips that were unveiled on Thursday on social media and portray each talent in a different room of the location.

Seated next to the actor and wrapped in a black gown with floral embroideries, singer H.E.R. reiterated her support to Valli and the project after joining the designer on the red carpet of the Cinema Against AIDS amfAR gala during the Cannes Film Festival in May, when the collaboration was first announced.

Back then, Kendall Jenner also flanked the designer dressed in a neon pink tulle number that contributed to break H&M’s social media reach record as it reached 650 million users.

This time, Jenner sported a pastel pink, short version of that dress to open the show.

Classic music alternated to rap tunes embodied the duality of the extensive lineup, which offered signature codes of Valli’s feminine and romantic aesthetic spiced with a youthful approach. The designer, who said he had the new generations in mind while conceiving the collection, expanded its first, ballgown-focused range to include different shapes, patterns and fabrics.

Tulle remained key in flamboyant pieces, rendered not only in pastel tones but also in bolder red and black colors, often styled with logoed or embroidered hoodies, net stockings embellished with pearls or crystals and creeper shoes downsizing their feminine couture image to channel an easier attitude.

Shorter floral frilled dresses also echoed the core aesthetic of the designer serving a more daily use, while minidresses covered in sequins or decorated with crystal appliqués had a rock glam vibe, as the one sported front row by Chiara Ferragni, who also fronts the campaign.

Bleached denim and leopard prints were a fresh introduction in the range and contributed to its more street style take enhanced via a mix-and-match of different animalier patterns — that informed coats, blazers, sweater and pants — with baggy jeans as well as allover sequined pants, frequently styled with high-heeled laced booties with bows. Another constant motif was a crystal bedecked buckle shaped after Valli’s own lips, that appeared on sandals, belts and necklaces.

For the second, wider drop of the collection, Valli also introduced men’s wear. In a preview with WWD on Thursday morning, the designer said his goal was to tear down the gender boundaries, operating in sync with the gender-fluid approach of the new generations. “Giambattista Valli represents the more feminine side of an individual, whether it is a girl or a boy. So I took all the embellishments, fabrics and textures that are part of my DNA and made them accessible to everyone,” he said.

This resulted in a line of animal-printed jackets, sweatpants and suits, floral embroidered sweaters styled with red leather jackets and bleached denim pants and shirts. The overall Nineties grunge vibe was hinted at during the preview by the designer when mentioning Kurt Cobain’s approach, “who used to wear Courtney Love’s clothes effortlessly.” Additional black-sequined looks and a kaleidoscopic glittery suit worn with a gray hoodie offered a sparkling Instagram content for the influencers attending the show.

The attitude Valli injected in men’s wear got the stamp of approval by Troye Sivan, who appeared front row wearing a white shirt loosely tucked in bleached denim pants and styled with a pearl necklace similar to the one worn by Valli himself.

“I’m so excited to be here at the show, I love the collection, I have been wearing it all day,” said the Australian singer, who considers fashion as “a form of self expression that it’s really exciting and that I have a lot of fun with.” Although he wished he had more time to spend in Rome, which he defined “the most beautiful city in the world,” Sivan said he has been busy working on new music in the past few months and hinted at the release of new projects outside this field.

Another strong element throughout the collection were brocade embroideries adorning basic pieces. The motifs were in full display in some men’s wear looks inspired by French historic tailcoats, which were also selected by the designer to be worn by all male models during the finale.

During the final parade, the female counterparts strut down the catwalk in an eye-catching red tulle number, which was also the closing look of the show sported by Italian model Vittoria Ceretti.

In the audience, the piece appeared on Sofia Carson. “I chose it with ‘Giamba’ yesterday. When I saw the collection’s photos, that was the first one that popped up to me and he was like ‘It’s yours’ and I couldn’t have been happier,” said the actress, who just finished shooting the “Feel the Beat” movie coming out next year on Netflix.

“Giambattista Valli to me is not only a dear friend but someone who I have admired for so many years and I’ve worn his pieces for some of the most important moments of my life, so to be here celebrating him and this collection with H&M is such an honor,” continued Carson, adding that the show was her first one in Rome.

Euphoria’s Alexa Demie was also thrilled to have got a ticket to the event, as she proved to be a Valli fan. “I think he makes beautiful pieces, so detail-oriented and just gorgeous, like a dream,” Demie said before heading backstage to greet the designer.

Here, Valli returned the compliments, bowing to the actress and enthusing, “We were dreaming with you all summer!” in reference to her HBO show. Demie was quick in noting similarities between the makeup of Euphoria and the one seen on the catwalk, which was all about colorful glittery eye shadows and crystal bedecked eyebrows.

Before moving to the Grand Hotel Plaza for the after-show party hosted by Ibiza’s Circoloco, guests stopped by the nearby pop-up store dedicated to the project. Just for the night, they were given the opportunity to purchase all the pieces in the collection in advance of the official launch. They seized the moment rapidly, as many racks were removed after being emptied in short time. All the other apprentice “Valli Girls” and boys will have to wait until Nov. 7, when the collection will be available in selected H&M store worldwide.