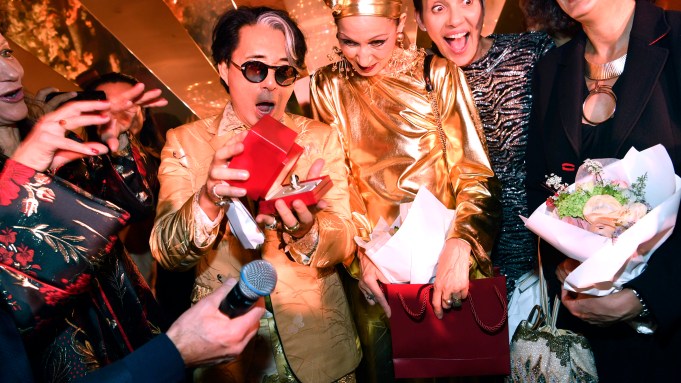 TURNING 80: It was a night to remember. There were glittering chandeliers, blooming cherry trees (fake) and flitting butterflies (real) at Kenzo Takada’s 80th birthday party, held at the Pavillon Ledoyen on Thursday. But it was the people-watching that proved the most entertaining.

A testament to Takada’s loyal friendships over the years, some of the Japanese designer’s oldest acquaintances turned up to party like it was 1970 all over again.

“The first time I met Kenzo was at Le Palace,” said film director Eva Ionesco. “He was very drunk and dressed as a woman. He climbed up a curtain and promptly fell down.”

Model Pat Cleveland was looking radiant in her gold dress, twirling a gold fan – the accessory de rigueur that night, given to guests as they walked in.

“I have so many memories with Kenzo — traveling round the world, going to Mount Fuji, dancing in the rain, showing off wherever we went,” said the model, who also met the designer at iconic Parisian club Le Palace in the early Seventies. “But also the big celebration shows that he would do: he was the first designer to ever do fashion shows that were actual entertainment. And that was back in the Seventies!”

“The first time I saw Kenzo, he was painting his boutique in the Galerie Vivienne in the manner of Le Douanier Rousseau,” remembered Castelbajac. “I asked him there and then if he wanted to design a collection for my mother’s fashion line, Ko and Co, which I had taken over. He accepted, and came over to Limoges to design two historic lines alongside Chantal and me.”

He turned to Thomass. “What was the year I first came over to your house? 1970?”

The lingerie designer acquiesced. “I remember my first ever fashion show: it was in 1971, with Dorothée Bis and this new Japanese designer who had just appeared in Paris,” she said. “Kenzo turned up and was already a real pro: the clothes racks were all in order, he had done a proper casting for models…He taught me my first fashion lesson.”

The designer admitted that her favorite memories were the wild evenings spent at Le Palace. “We partied a lot together,” said Thomass. “It was always the same crew: Thierry Mugler, Claude Montana, Sonia Rykiel, Castelbajac.…We would all go on holiday together and work on creative projects. We had a lot of fun.”

The party’s star guest was on top form, dancing the night away in a golden suit, waving his fan and greeting Carol Lim and Humberto Leon, the current creative directors at Kenzo, with a hug (Takada sold his company to LVMH in 1993 and stopped designing for the brand in 2000.) Jane Birkin, Catherine Baba and Setsuko Klossowska de Rola also turned up to deliver their birthday wishes.

As midnight approached, Takada was summoned to the stage as a huge glittering gift box was wheeled onto the dance floor: two barely clothed male dancers sprang out of its lid and started a mesmerizing performance to much whooping from the crowd. The party continued until 4 a.m., proving wild nights out definitely have no age limit.