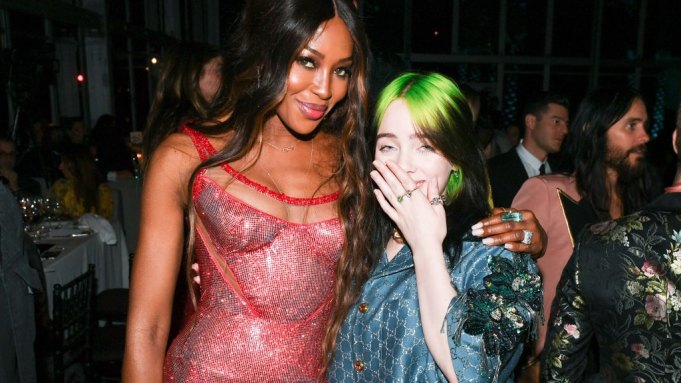 “We’ve been waiting for you!” Laura Dern exclaimed as Ava DuVernay arrived under the “Urban Light” street lamps at LACMA’s Art + Film Gala in Los Angeles on Saturday night. The two, both in head-to-toe Gucci, embraced in a warm hug. “Now the party gets started.”

There were plenty of Gucci looks at the annual event presented by the Italian fashion house. Now in its ninth year, “the Met Ball of the West” as it’s been called, brings together high-profile creatives from the worlds of art and entertainment to recognize an artist and a filmmaker. This year, it was L.A. native Betye Saar and “Roma” director Alfonso Cuarón.

“The mystic eye,” said Saar, in custom Gucci, of the bejeweled diamond jewelry piece by Neil Lane on her black turban. “It’s a symbol that I use a lot in my work,” said the assemblage artist, a political voice since 1972, when she entered a small box containing an “Aunt Jemima” mammy figure wielding a gun, into an open call for black artists at a community center in Berkeley not far from the Black Panther headquarters. The piece was titled “The Liberation of Aunt Jemima,” and it inspired many, including superstar John Legend, who presented the artist with her award onstage, sharing that when he first made it big, “a couple of things I bought with my new money were Betye Saar pieces.…She is an icon of the feminist and black art movement.”

The 93-year-old Saar said living and working in the city “brings a freedom that the East Coast and other places don’t have. A freedom to pick out different, unusual material, and I think that’s what makes L.A. artists unique.”

What advice would she give her younger self? “Do it the same way,” she said with a smile.

Donald Glover first saw Cuarón’s 2003 “Y Tu Mamá También” when he was in 11th grade. “It changed how I felt about masculinity,” the actor/singer said onstage of the filmmaker, one of his creative idols. “His film ‘Children of Men’ is something I watch when I want to make something, it represents what art should be, which is to be so honest as to be prophetic.”

The fundraiser, a cocktail followed by a Spanish-themed dinner and a performance by Anderson Paak & the Free Nationals, brought out more than 800 guests and raised more than $4.6 million this year with proceeds supporting the museum’s initiatives and exhibitions.

“It brings together art and film, but also music and fashion, design,” said Govan. “Years ago, over a decade ago, I moved to Los Angeles, and you kind of assume that all creative communities are together. That’s the outsider’s perspective. But it seemed like the art and film communities, you know, they lived in their own world. This was a specific project to bring everyone together. We hope we’ve done that, bring people together that haven’t been. A lot of friendships have been made at this event.”

“It’s always beautiful to be here,” said Michele of his affinity for L.A., where last year he hosted a fragrance party at one of his favorite haunts, the Hollywood Forever Cemetery. “I love that it’s getting bigger,” he said of the annual gala. “We’re trying with the team to make it bigger with young people, artists, singers and friends. The is a party with people who love each other. It’s not really an event, it’s big but it’s cozy.”