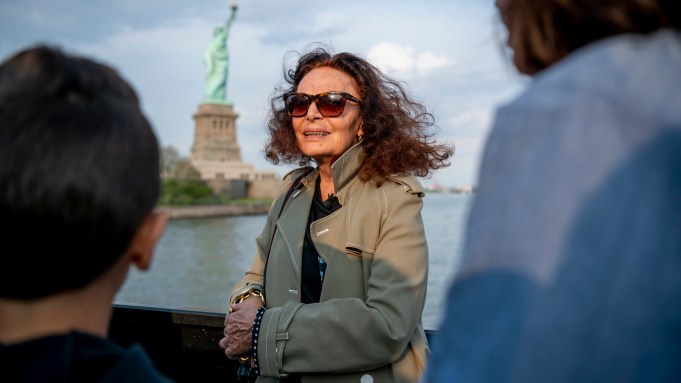 It was a big weekend for fashionable ferry rides: first, the Veuve Clicquot Polo Classic carted Manhattanites over to New Jersey on Saturday, and on Sunday it was DVF’s turn. Timed perfectly between Sunday’s thunderstorms, von Furstenberg hosted a private picnic over on Liberty Island in honor of the newly opened Statue of Liberty museum.

As the boat pulled away from lower Manhattan around 6:30 p.m., DVF took to the intercom system to deliver a much livelier welcome aboard that the usual programmed message.

“Hello everybody, this is DVF, the official godmother of Lady Liberty,” she said as the sail to the island began. “You’re very lucky, you can actually go on the island with no tourists!”

The evening’s weather kept the entirety of the expected VIP guests back home, but von Furstenberg didn’t let that dampen the evening. She sneaked away from the guests and parked herself on the museum’s steps, gazing up at the statue for the length of cocktail hour.

“It never gets old,” she said of the view. “I’ve become so involved with her: I just finished a huge biography [with Rizzoli] and I made this happen and I did the documentary [with HBO] and the app. It’s weird how I got involved with her. I didn’t want to. I didn’t want it at first at all, and then I got into it and now I feel I’m so privileged. I mean, I’m connected with her forever.”

Guests who did make it out, including Fran Lebowitz and Steve Kolb, had the opportunity to climb inside Lady Liberty and look out from her crown, as well as explore the museum, which just opened last week. Afterward it was time for a picnic dinner and the sail back home, which docked just in time to avoid the lightning storm.