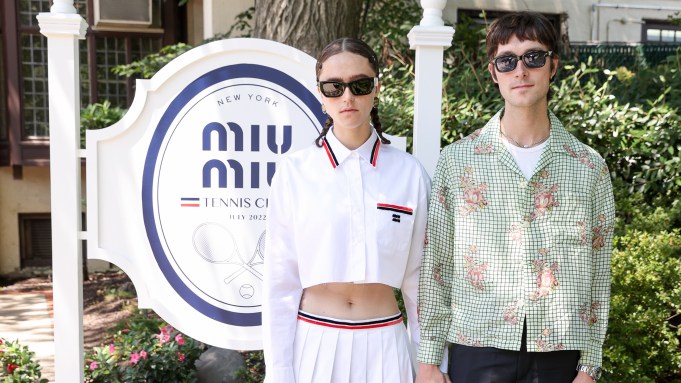 The brand took over the West Side Tennis Club in Forest Hills, Queens — the former location of the U.S. Open — for the second edition of Miu Miu Tennis Club, which launched last week in Saint-Tropez as an immersive celebration of the fall collection. Miu Miu’s signature was everywhere at the private club: everything from official West Side Tennis Club signage to white tennis balls and the club’s perimeter windscreen banners were transformed and branded for the one-day-only branded club. On arrival, guests were handed a blue mesh drawstring bag containing two sweat wristbands — which were put to good use for anyone who braved the 90-degree heat and stepped onto the grassy courts to take a swing at the sport. (Professional club instructors were on hand to offer instruction and optimistic encouragement; asked for a performance review of the afternoon, one instructor responded with nothing less than an enthusiastic “great.”)

“Serving,” exclaimed Richie Shazam, bouncing a ball on one of the white rackets provided at a Miu Miu tennis cart. Asked if they’d played a round on the court yet, Shazam gamely offered, “No, I’ve just been cosplaying.”

Whether or not guests took the opportunity to pick up a racket, most everyone at least looked the part in pleated Miu Miu skirts of varying lengths. (Yes, even the micro mini made an appearance, worn by the likes of Shazam, Jenny Walton and Athena Calderone.) Guests, composed mostly of models and editors, included Alex Cooper, Hailey Gates, Brigitte Lacombe, Destiny Joseph, Tanner Reese, Brianna Lance and Reign Judge. Ella Emhoff — whose 2021 inaugural breakout moment came courtesy of her Miu Miu coat — and boyfriend Samuel Hine stepped onto the court for a round of doubles play; others spotted playing throughout the afternoon event included stylist Brie Welch, model Emily DiDonato and Sky Ting Yoga founder Krissy Jones.

Throughout the afternoon, model Mona Matsuoka DJ’d as the crowd dined on summery fare like lobster rolls and strawberry salads on the club’s patio, which offered prime (and shaded) court views. As the arsenal of tennis balls began to dwindle, so did the lineup of black SUVs parked outside the club as guests hung up their rackets and began the journey back to their home boroughs.