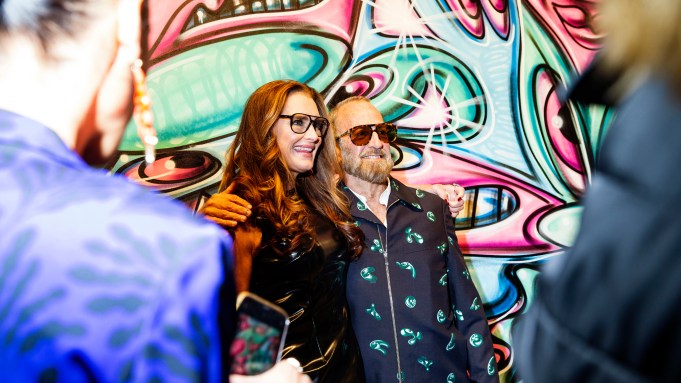 Everyone got lit at Tuesday night’s Tribeca Ball.

Around 7:45 p.m., silicone electronic bracelets handed out at the door began emitting a neon blue glow, calling guests — who were spread out among four art-packed floors at the New York Academy of Art — down to dinner. One guest took artistic liberty with the accessory, looping it around her ankle.

This year’s gala fundraiser for the downtown art school honored Kenny Scharf, who came decked in a jacket from his recent collaboration with Dior and monogram sneakers. The previous afternoon, the artist had painted a mural inside the school’s lobby featuring his signature colorful expressive faces.

“I just make things up on the spot, I just do my thing. I showed up and I was feeling these colors, and here we are,” Scharf said of his newest work. The artist was also busy putting the finishing touches on his new solo exhibition for Totah Gallery opening in time for Earth Day, “Woodz ‘N Thingz.” “I’m honored to be honored,” added Scharf of the nod from NYAA. “It’s pretty amazing, I’ll take it.”

Scharf was joined at the event by fellow old school New York artists including Lee Quinones, who donned a Mets hat (who are off to a strong season, winning their double-header on Tuesday), Futura, and 2019 Tribeca Ball honoree Kaws.

“Our board chair, Eileen Guggenheim, was one of [Scharf’s] teachers in L.A. before he came to New York,” said NYAA president David Kratz. “And she said to him, ‘You should go to New York, and you should be part of that scene.’ And he was influenced by that and went,” he added. “So he’s always been a friend, and we also really admire what he does and his spirit. He’s a figurative artist who’s merging popular culture and fine art together.”

Asked how long the school planned to keep Scharf’s mural up, Kratz clarified that they had longevity in mind for the piece. “It’s actually on canvas, so it can be taken down. It is actually a painting. I’d love to keep it, period. In my office!”

Longtime NYAA supporter Naomi Watts arrived with Sunrise Ruffalo, and board member Brooke Shields was welcomed into the space with a warm embrace from Scharf. “It’s only been a little while,” she exclaimed as she greeted the artist.

After going virtual for last year’s event (which featured a conversation between Shields and Scharf), the Tribeca Ball was back in-person for the first time since 2019. Guests came ready to mingle. “I went into the archive for this,” remarked artist Pia Ledy of her scribble-print jacket as she made her way through the lobby.

On the upper floors of the school, NYAA artists welcomed guests into their studios, with art for sale canvassing every wall. Buzzy young artist Robert Nava wandered through the various studios, eventually making his way to the top floor where Francesco Clemente and event chair Alba Clemente chatted with friends, models dazzling with jewels from event sponsor Van Cleef & Arpels stationed nearby. In an adjoining room, artists painted and sculpted live portraits as sponsor Champagne Bollinger kept the bubbles flowing.

As additional attendees queued outside on the sidewalk for entry to the general admission Studio Party, VIP guests including Helena Christensen, Nicole Miller and “Emily in Paris” star William Abadi made their way back down to the ground floor for dinner, where Scharf was awarded an honorary Doctor of Fine Arts from the academy.

Save Venice Returns to New York for 50th Anniversary