Inside the BET Awards 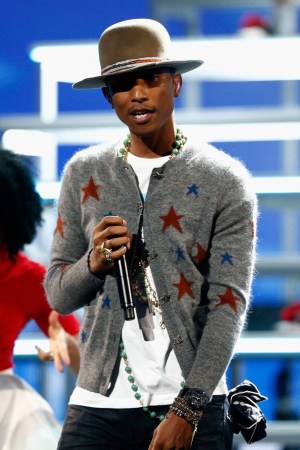 Noticeably missing from the BET Awards on Sunday (besides nominees Lupita Nyong’o, Drake, Beyoncé and Jay-Z): Pharrell Williams’ famed oversize chapeau from the Grammys. In its place, the “Happy” singer donned a more conservative topper for the bash — held at the Nokia Theatre, L.A. Live — a taupe Panama-style hat. Usher, on the other hand, refused to hang up his flamboyant raccoon-tail hat, which he sported while performing an electrifying medley of hits. Several other artists also opted for flashy headgear, including Lil Wayne, August Alsina and Chris Brown, all of whom took to the stage in flannel attire. Also on trend: white body-conscious dresses spotted on Eva Marcille, Keke Palmer, Gabrielle Union, and Paris Hilton, who stepped out in a revealing cutout number that prompted host Chris Rock to offer: “You are getting your Kardashian on tonight!” Rock, who throughout the four-hour show roasted everybody from Rick Ross to Beyoncé, made it up to Hilton by offering her — and a few select others — Roscoe’s House of Chicken and Waffles, one-upping Ellen DeGeneres’ pizza delivery during the Oscars.

Men bore the brunt of the wardrobe malfunctions throughout the show, including Williams, who struggled to unbutton his cardigan during the show’s opening number with surprise guest Missy Elliott; and Usher, who failed to complete a quick change in time for an unexpected drumming solo, forcing him to keep the beat with his leather jacket still awkwardly attached to his right side.

Nobody suffered a Jennifer Lawrence-esqe spill, but some came dangerously close, thanks to a conveyor belt-like device that precariously transported presenters to the stage. “I was trying to be cool in these Uggs and I almost slipped and fell on my ass!” Williams admitted, while Union was also thrown off balance.

“I love me some Usher,” Kerry Washington raved while towering over co-presenter Kevin Hart. Earlier, fans — who stood by the stage in a “mosh pit” — chanted Washington’s name in hopes she would take home Best Actress hardware, but no-show Nyong’o proved unbeatable at yet another award show.

Lionel Richie received a standing ovation upon accepting a Lifetime Achievement Award and noted, “Soul is a feeling, not a color,” before thanking his family. While he played crowd-pleasers “Easy Like Sunday Morning” and “All Night Long,” an incensed Rock pointed out one glaring omission. “‘Zoom’ is the best song!” he insisted, adding, “My mom had to sit through a bunch of rappers and you didn’t play Zoom?”
Easily more upsetting for the audience: after a much-hyped finale by Jay-Z and Beyoncé, a prerecorded performance rolled (the couple is on their “On the Run” tour). Once attendees realized the two would not materialize in the flesh, the theater quickly emptied.