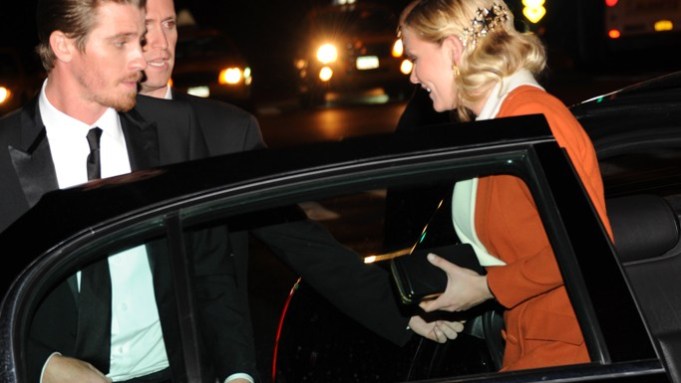 When New York City Mayor Michael Bloomberg addressed the crowd at the Metropolitan Museum of Art on Monday night, he dubbed the Costume Institute gala the “The Oscars of the East.”

He had a point about fashion’s biggest night of the year. The gala, which raised more than $11.5 million, rivaled its Hollywood equivalent in both fashion and verve. After a passionate rendition of Puccini’s “Nessun Dorma” by Italian tenor Vittorio Grigolo, Bruno Mars rocked the Temple of Dendur, which was decorated in the Surrealist style with a giant lip projection and chairs upholstered in some of Prada’s most recognizable patterns.

Mars recounted telling Anna Wintour that he would like to have an impossible conversation with Michael Jackson, and pepper it with some Jay-Z and Kanye West.

RELATED STORY: On the Red Carpet at the Met Gala >>

“Maybe, just maybe, we would have come up something like this,” he said, launching into a funk medley that included The Police’s “Roxanne,” and Jackson’s “Dirty Diana,” among others. By the end, the entire room was on its feet dancing.

That spirit extended to the official after party at the Harry F. Sinclair House, where Miuccia Prada and Patrizio Bertelli roamed the floors — at times holding hands — and were joined by Mick Jagger and L’Wren Scott, Jessica Biel and Justin Timberlake, Emma Stone, Jessica Chastain, Sofia Vergara, Kirsten Dunst, Marc Jacobs and Suzy Menkes, who, in the spirit of Schiaparelli’s surrealism, wore a crushed red soda can in her pompadour hair. It was a hot party, literally. At one point, gala cochair Carey Mulligan pulled open a window, much to the delight of her fellow English actresses Michelle Dockery and Laura Carmichael, who joined her for a smoke.

Alicia Keyes was the first surprise performance, but it took Azealia Banks (in a feline getup replete with whiskers) to really get the crowd going with some seriously wild dancing. Even Miuccia Prada herself couldn’t resist the vibe. During Banks’ porn-tinged hit “212,” the usually more-reserved designer was seen tapping her foot along rhythmically.

Two blocks north, a less official after party was under way at Crown. Among the crowd dodging streamers and balloons in the restaurant’s dining room were Karolina Kurkova, Rachel Zoe, Jamie King, Jamie Tisch, Ashley Greene and Jessica Stam. The latter pair had changed from their respective Donna Karan and Dior gowns into more after party appropriate short black cocktail numbers.

“It’s easier to move around [in this],” Greene said, “though I loved my dress tonight.”

By 1 a.m., the restaurant began to empty seemingly as quickly as it had filled. Many guests headed either to The Boom Boom Room or home to change. “Oh, I’ve got an after party dress lined up,” Kurkova grinned, “something short, something black, you know, an after party dress.”

Technically, it was an after-after party at The Boom Boom Room, where the model joined a crowd of the night’s journeymen and women as well as a few more casually dressed additions. Beyoncé Knowles and sister Solange made a brief appearance. Banks, who arrived with Alexander Wang and his crew, was still in her cat makeup. Kristen Stewart, dressed down by then in a leather jacket, tried her hardest not to be photographed upon her arrival while Dunst danced with Garrett Hedlund. Behind that pairing, Scott danced on a banquette while Jagger shimmied below. Knicks forward Amar’e Stoudemire towered above the crowd, earning more than a few approaches from playoff-mad fans. But as with any marquee night at the Top of the Standard, the best sightings took a little work.

“Is that Gary Oldman?” a seemingly starstruck Ed Westwick asked no one in particular as he leaned against a railing to survey the club’s booths a little past the night’s peak.