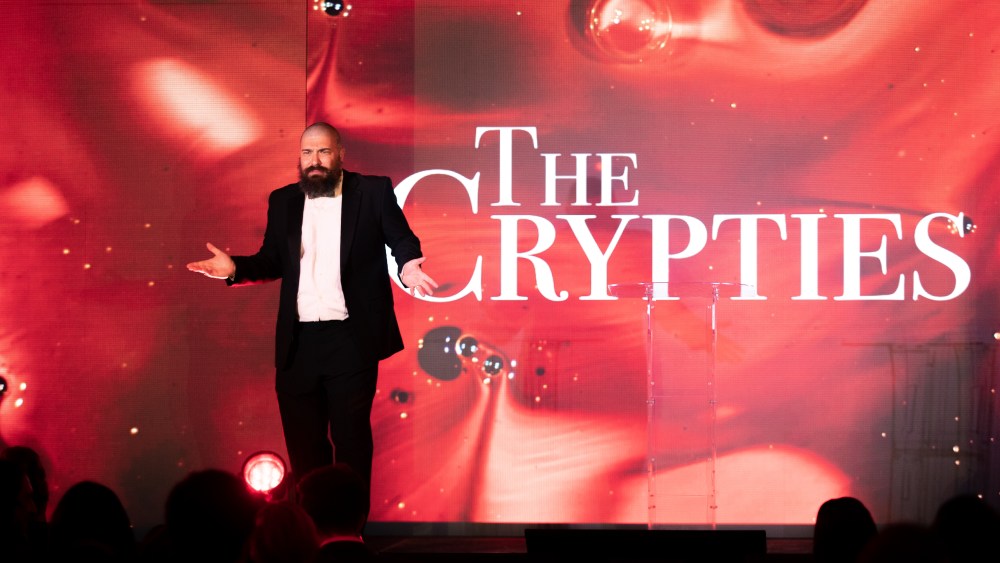 “I know most people in this room have at some point heard that they were crazy,” said Joshua Ostrovsky, aka The Fat Jewish, addressing the crowd at Faena Forum on Wednesday night. The entertainer was facing rows of creators from the crypto world, gathered in Miami Beach for the first Crypties awards ceremony celebrating blockchain excellence, presented by Decrypt Studios.

“Your skeptical friends and out of touch Boomer parents all told you that cryptocurrency is a passing fad, and that all of these coins one day would be totally worthless,” continued Ostrovsky, the evening’s MC. “But tonight, here at the Faena Ballroom, we can finally say: only some of them.”

The ceremony was quick to address the many elephants in the room, including disgraced FTX founder Sam Bankman-Fried. The opening video posed a question that many in the crowd were wondering — “Where is Sam Bankman-Fried?” — and a photo of the “on the lam” crypto exchange founder drew boos from the crowd.

“We’re celebrating art and creativity tonight and the Web3 space in general,” said Decrypt Studios founder Alanna Roazzi-Laforet during the pre-ceremony cocktail hour. “It’s a trying time because of what’s going on with FTX, but it shows that there’s commitment to the space. People are super excited; they really want to show their innovations and that they’re moving forward in a positive way,” she added, surveying the crowd, who donned their “black tie optional” finest for the occasion. “We don’t dress up in crypto at all; it’s usually T-shirts and shorts. So this is a very special event, because nobody ever wears black tie.”

Pink-haired PussyDAO founder Izzy Howell, dressed in teal, had launched an NFT earlier that day that could be redeemed for a pair of physical panties. Howell, who previously worked at Tamara Mellon, got the idea to launch NFTs tied to lingerie while she was at utility token project Cipher.

“It started as a joke,” Howell said. “I was working at another crypto company and all of the guys were talking about liquidity, and they kept saying, ‘Liquidity is all that matters, it’s the most important thing,’ and for whatever reason the next thing in my head was I wanted to make a pair of underwear that said ‘highly liquid’ on the crotch. And everyone wanted to buy it. I have them with me,” she added, pulling the lingerie from her fuzzy pink handbag. “We launched literally today, and we’ve been selling like crazy.”

Lamina1 president Rebecca Barkin, who spoke to the need for more female leadership within the crypto community, is building a layer one blockchain to support an open metaverse economy. “Our focus is to give creators a path toward more favorable economics outside of this system we have today,” she said.

While the Crypties celebrated blockchain excellence, the ceremony also paid tribute to the blockchain lows. The ceremony opened with an “in memoriam” that paid tribute to celebrities whose dreams of striking it big in cryptocurrency have since died: Odell Beckham Jr. — who lost half of his 2021 salary by accepting payment in Bitcoin; Madonna; Floyd Mayweather; Paris Hilton; Tom Brady; DJ Khaled; Quentin Tarantino, and Kim Kardashian, who was fined $1.26 million for failing to disclose that she was paid to promote EthereumMax.

“I feel like I finally got my Grammy,” said Bored Ape Yacht Club’s Illa Da Producer, accepting the golden statuette on behalf of the project’s founders.