Inside the Met Ball Cocktail Hour 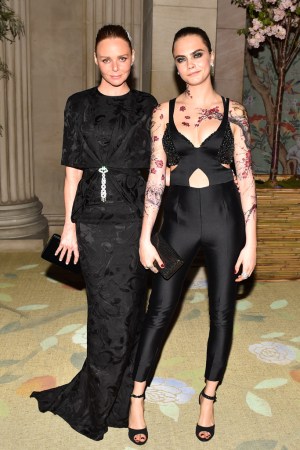 “He’s a virgin,” Jourdan Dunn said plainly on Monday night. The model was seated on a mint-colored cushion in the Metropolitan Museum of Art’s Temple of Dendur, currently bedecked in chinoiserie print, mossy greenery and women dressed in traditional Chinese costume strumming mandolins (only the paper lanterns and gold coins were missing).

“It’s my first time,” James Bay, the “virgin,” said. The two were Burberry’s unofficial prom king and queen for the evening and Christopher Bailey’s dates. Dunn is a Met ball veteran; Bay, not so much. “She’s the pro. I’m taking tips,” Bay said, his voice tinged with Brit boyishness. Dunn’s tips for making it through the evening? “What did I say?” she said turning to Bay. “I think I said, ‘Don’t trip on the steps; carry lots of mint because you’ll be talking to lots of people; and don’t be nervous, drink plenty of Champagne for that part.’”

Around them, the room was filling up with celebs and moneyed donors who were guzzling Champagne to avoid nervousness in their presence. One could lily-pad circle to circle, celebs lumped together based on type of pop culture relevancy. At the center of the room were the former Disney stars (or those you could mistake as such) — Vanessa Hudgens, Selena Gomez, Hailee Steinfeld, Lily Collins — fluttering about. Toward the front, the Millennial model-cum-Instagram-stars gathered; Hailey Baldwin and Bella Hadid on a BFF double date of sorts with Gigi Hadid and Kendall Jenner.

Off to the side, Larry David kept to himself. He had been one of the first to arrive, and earlier took his time through the exhibition with Kenneth Cole, his fashion date. David consummately lives up to his caricature — he strolled around the gallery, hands in pockets, gum snapping, lapped the LED-lit bamboo installation, looking at it appraisingly. At any moment, it seemed as if he’d turn to Cole and shrug. “Eh?”

Gemma Ward was more impressed. “It’s beautiful, isn’t it?” she said, widening her pool-blue eyes. She had just spotted a familiar objet d’art. “That’s the headdress I wore in McQueen,” she said pointing over to a Philip Treacy creation in a vitrine. “It’s when he did the show with the chess pieces. I can’t believe that’s been on my head.”

Diane Kruger and Joshua Jackson were similarly blown away (or perfunctorily feigned enthusiasm as the public relations-trained do so well). “Spectacular!” Jackson said. “Those dresses are pieces of art,” Kruger nodded. “Incredible, beautiful,” Claire Danes said, echoing the sentiment while attempting to secure a martini from the bar.

“Thank you,” Kim Kardashian West said reflexively when Madonna complimented her Cavalli barely-a-dress. Then, without missing a beat, “It’s not great for bathroom breaks, though.”