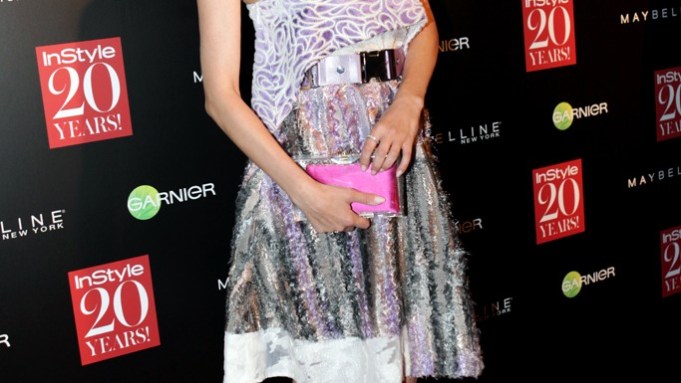 A step-and-repeat in Times Square will obviously attract attention. Case in point: InStyle’s 20th-anniversary party, hosted by Ariel Foxman and Karin Tracy and sponsored by Maybelline and Garnier, was inconveniently located at the Paramount Hotel’s Diamond Horseshoe, which is situated among multiple Broadway shows and hotels. It’s a tourist trap.

But that didn’t seem to bother any of the party guests.

Jennifer Hudson clad in Versace and six-inch stilettos, which she could barely walk in, posed for the flashing cameras. When a woman on the street yelled, “You look amazing, Jennifer. I love you!”, Hudson replied, “Thanks, girl.”

Hudson, who had performed at a birthday party a few weeks ago in Dallas for a fan, claimed that it inspired her own birthday, which is on Sept. 12.

“I’m going to do the same thing and have my favorite artist come out and perform for my birthday,” she said.

Meanwhile, Laverne Cox arrived arm in arm with Marc Bouwer, who happily stood in the trenches while Cox spoke to the press.

“I don’t wake up like this,” said Cox in a body-conscious Marc Bouwer dress. “Fashion week has been such a blur. [But] hugging Naomi Campbell, I live for Naomi Campbell, at the Fashion Media Awards has been one of my [highlights of fashion week.]”

Christian Siriano, who launched his first fragrance on Sept. 3 at a pop-up shop in the Meatpacking District, was excited about the quick success of his scent. He even noted that Jennifer Lopez had popped in to pick one up.

“It’s kind of funny because I work with her all the time,” said Siriano. “I was like, ‘Why don’t you just ask for it?’ ”