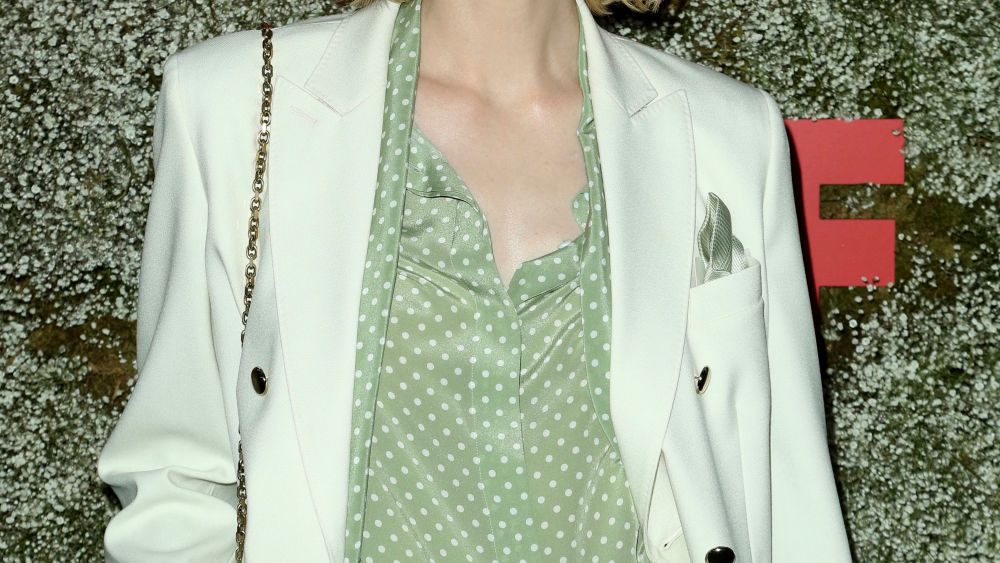 The future for women in entertainment looked bright during a night of fashion and female empowerment Tuesday in L.A. On the eve of the Women in Film Gala, Max Mara hosted a cocktail reception at the Chateau Marmont, honoring the 2019 Face of the Future recipient, Australian actress Elizabeth Debicki.

“It feels very nice and encouraging,” Debicki said of being tapped for the award. “I was very surprised and I was very flattered.”

Lauded for her work in “The Great Gatsby” and “Widows,” Debicki joins the ranks of past recipients including Alexandra Schipp, Zoey Deutch and Natalie Dormer in being honored by the organization that advocates for and advances the careers of women in the screen industries, celebrating them in an annual awards gala. The Face of the Future award recognizes a rising star at a turning point in her film and television career.

Representing the brand’s relaxed tailoring, Debicki was in a cream Max Mara pantsuit over a mint-green and cream polka-dot blouse, a look she described as “Katharine Hepburn meets Max Mara.” She added, “I think the fact that they support this award and have for a long time and that they have this relationship with Women in Film is very symbiotic and organic and very authentic.”

The evening’s host, Max Mara vice president of U.S. retail and global brand ambassador Maria Giulia Maramotti, said Debicki was a natural fit, not just for the award, but also for the Max Mara brand: “Mostly because she really is someone who in the choices of her work is really forward-looking.…Her style for us was also a very strong match, especially the way that she really plays around with wearing clothes that feel good in her own skin.”

InStyle editor in chief and cohost of the event Laura Brown echoed the sentiment. “I love this girl,” she said of the fellow Aussie. “I only met her about a year-and-a-half ago, but I’ve definitely watched her. She’s compelling and just physically gorgeous.…It’s been so exciting to see her come up.”

Brown, who donned a gray and beige polka-dot Max Mara dress that she laughingly said reminded her of a “very chic day drinker,” also addressed the greater significance of the occasion. “There’s been a lot of change and I credit that to Time’s Up and how organized they were coming out of the gate. It’s about having these relationships and friendships with each other and having each other’s backs in more of an organic way. Like that woman who I thought was going to be my competition is now my friend. It’s through friendship where you really make progress.”

Actress and filmmaker Olivia Wilde, wearing a dramatic black Max Mara tuxedo cape, also spoke on the importance of solidarity. “What it’s about is paving the way for women who are supporting other women who are making their way,” said Wilde, who recently made her directorial debut with the female-centric comedy “Booksmart.” “This is a movement that is not about an individual woman breaking through the glass ceiling and being celebrated. It’s about what she then does to reach out and lift up the next woman. We need to make sure to highlight all of the effort that is being made not just by individuals but institutions moving forward.”

“Someone Great” director Jennifer Katin Robinson explained how she makes diversity and inclusion a priority throughout her filmmaking process. “You just do it. It’s amazing to be in a position to hire and it’s not just about women, it’s about people of color and LGBTQ and inclusivity overall. There are so many people out there who are talented and amazing and want nothing more than to get a shot and I want to give them that shot.”

Wearing what she deemed a “super fashion-forward, one-shoulder polka-dot number,” Jaime King said she sees the future of the industry moving toward a more comprehensive and accurate reflection of society as a whole. “It’s about telling meaningful stories where people can see themselves,” King said. “Where it’s diversified not just in terms of ethnic diversity, but also story diversity. We need to have the responsibility that we are making sure that no matter what the race or color or situation, we are creating windows and mirrors for all people to see themselves on screen. I think that is really starting to happen.”