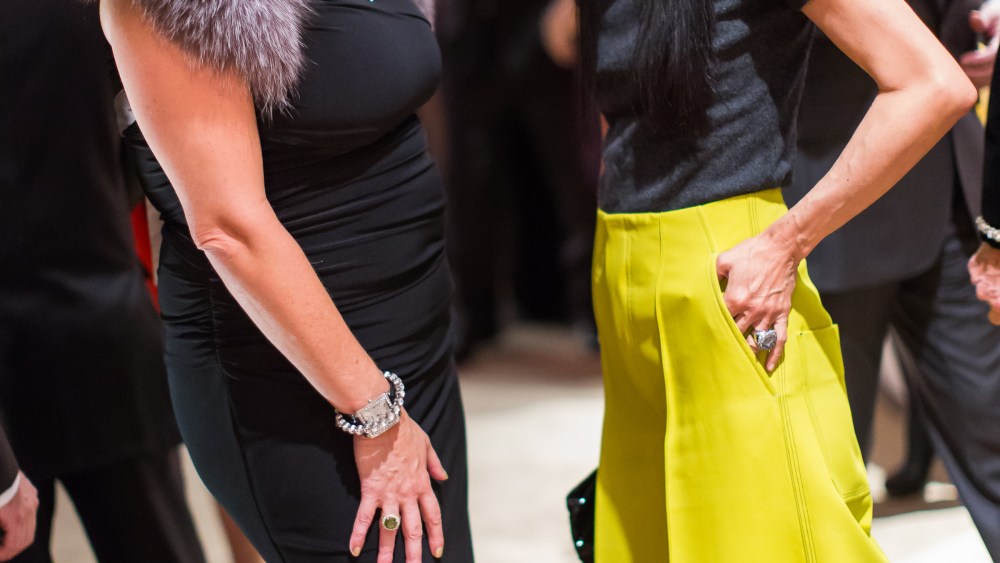 The early bird was out to get the worm on Thursday night, as the 27th annual International Show kicked off at the Park Avenue Armory with The Society of Memorial Sloan Kettering’s Opening Night party. “I got here at 5:55 p.m. and there were lines outside — I’ve never seen such a turnout,” said Jennifer Creel, cohosting the event.

And just what was worth lining up for? Well, a little bit of everything. The International Show boasts a highly curated selection of worldwide antiques, fine art and design. This go around offered something new in every corner; one guest swooned over a golden horse sitting on a credenza — “to die for” — while others flocked to a 1945 Trans World Airlines poster, which “basically tells the story of the Twentieth century,” an onlooker commented.  Several visitors still stopped to gaze upon Ormond Gigli’s 1960 photograph “Girls in the Windows.”

Between bites of caramelized bacon, an annual favorite (along with the art, of course), visitors including Michael Bloomberg, Jo Carole and Ronald Lauder, Jamee Gregory, Muffie Potter Aston and Helen Lee Schifter hopped from booth to booth.

“Obviously, I think there are a lot of beautiful pieces of art around,” Creel continued. “But you know, jewelry is my thing.” She made a beeline for the collection of David Webb on site, the largest secondhand collection of Webb in the world.

“This is the first time that they’ve rethought the event, and it’s now called the International Show,” said Lavinia Snyder of the evening, which was formerly known as the International Fine Art & Antiques Show. Snyder, president of The Society of Memorial Sloan Kettering Cancer Center, which hosted the evening, continued that the goal was to come up with a more modern look. “We thought if ‘we look into the past we can find the future,’ and we did. And what we found is that there are few things in New York that give you a sense of belonging.” Therefore, this year’s show aims to highlight “the fact that we have a lot of international dealers that come, ranging from jewelry to silverware to midcentury antiques.”

Fashiony guests circulated around a signed copy of Hubert de Givenchy’s “To Audrey with Love,” as well as all 12 issues of the short-lived 1950s magazine “Flair.” Another showstopper? A set of 14 facsimile copies of first editions of Ian Fleming’s James Bond books — timely reading, ahead of the Nov. 6th premiere of the newest Bond film “Spectre.” The shopkeeper was busy working his sales pitch: “If they were first editions, you’d have at least another zero on the price.”