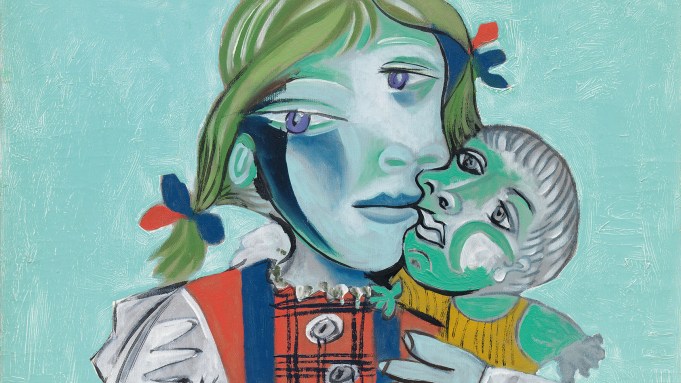 PARIS — As far as family albums go, it doesn’t get more impressive than art historian and curator Diana Widmaier Picasso’s latest exhibition based on her grandfather Pablo Picasso’s oeuvre. Titled “Picasso and Maya, Father and Daughter,” it’s themed around the intimate artworks he made inspired by Widmaier Picasso’s mother Maya, the daughter Picasso had with his longtime muse and mistress, Marie-Thérèse Walter, and the bond they shared.

The day also marked the launch of a web site cofounded by Widmaier Picasso — Menē — specializing in 24-karat pure gold and platinum jewelry, where customers can buy, sell and exchange pieces by weight. GoldMoney Inc. founder Roy Sebag is her partner in the venture with Sunjoo Moon as creative director.

Here Widmaier Picasso talks to WWD about the exhibit and her unique family legacy.

WWD: The exhibition shows another side to Picasso. Tell us about what you wanted to share.

Diana Widmaier Picasso: The idea was to gather portraits of [my mother] Maya, a process that unearthed a number of documents, drawings, photographs and films that we weren’t aware of, so it’s been [an exciting journey for] both for us and art historians.

It’s also the first time a show is entirely devoted to Maya, so you look at all the works with a different perspective. She was his first daughter — a lot of the works are full of tenderness, and also there’s also an element of childishness, like it was a rebirth for him. He’s observing his daughter and how she develops with great attention, both physically and psychologically, and then when you look at the paintings, there’s a whole new dimension.

WWD: Can you tell us a bit more about the context that these works were created in?

D.W.P.: Maya was a child of love, and there’s one work based on the mythological family, where he’s re-creating an ideal he thought not possible. There’s a lot of lightness and beauty within the show despite the context in which he was living in 1935, a kind of dramatic period where he was going through a divorce from his first wife, Olga, and with the war coming and a climate of anxiety.…So it’s not just a portrait of Maya, it’s a portrait of hope.

Marie-Thérèse, my grandmother, always incarnated a symbol of salvation. You see her face in “Guernica,” and he’s always using her face and body in terms of someone who can save the world. It’s very beautiful when you see it this way, as Maya being the daughter of someone who is saving the world. It’s much more than family portraits, it symbolizes peace, something that Picasso always fought for.

WWD: But on another level, it is also a family album….

D.W.P.: Yes, and you see it very much in the photos. I was walking through with my mother and she was saying how unfortunate it was that not many photos of her exist, as she always hated having her photograph taken, and then she discovered all of these works by Man Ray, André Villers, Lucien Clare….All the greatest photographers of the Fifties surrounded Picasso because he was a kind of superstar. He was on the cover of Paris Match and Life magazine, so obviously even the family became known to the world.

Neither of us was familiar with this. It’s an opportunity to see how proud he was of [Maya]. She’s looking at him with a lot of admiration and respect. You feel it in the photographs. You understand the relationship they had, which is even deeper because a portrait, it’s the way you look at a person. It’s not just the person. And when it’s Picasso, you get to another level.

WWD: Your grandfather died in 1973, a year before you were born. But you bear a strong physical likeness. Are you conscious of that?

D.W.P.: I’ve spent a lot of time with Françoise Gilot [another of Picasso’s muses and mother of two of his children] while living in New York, and she said that I reminded her of him, but more from the inside, which I don’t know how to take because of course he was a remarkable human being….

I think he was someone who was full of paradoxes — funny and playful and then very serious, severe even. He always wanted to move on to the next thing. He didn’t want to get bored. He always had an appetite to learn something new, like a schoolboy, and if there is any of him in me, it’s that: I’m a schoolgirl.

WWD: Your grandfather’s style was also pretty incredible. Do you still have any of his garments?

D.W.P.: They have been divided amongst family members, and my mother has a few pieces that are symbolic. There’s a raincoat from the Thirties that features in pictures by photographers like Brassaï. She also has a hat, and something very, very important: his very first pair of shoes. His father gave them to her.

WWD: You were at the recent Jacquemus show. Are you a follower of fashion?

D.W.P.: I have unconditional love for my friend Azzedine Alaïa. I think fashion tells you a lot about life — watching fashion in the street. Today, I’m wearing a Gucci dress. I like to vary. Now I have a six-month-old daughter, so I have a particular curiosity for children’s clothes.

WWD: Did having your daughter trigger this exhibition?

D.W.P.: Surprisingly, yes. When you see some of the drawings here where Maja is only a few months old, my daughter has blue eyes just like she did, and has a very round face. Unavoidably, it’s something more profound than a story [purely] about lineage, as a portrait of someone who is close to you but who also happens to be one of the most famous people in the world. I’m happy to share it, and I think that the people who have seen the show have been moved by the intimacy. I worked with the architect to preserve that feeling of intimacy, with the way the walls have been painted, the ambiance. Tonight we are discovering an intimate portrait of Maya.

WWD: How did your mother react to the show?

D.W.P.: She was very moved and surprised. She came on Sunday, quietly, just as I’d finished installing it, because I wanted her to be the first to discover the selection: things she knew, and things she didn’t know that we gathered from all around the world over almost a year.

WWD: Do you have a favorite work in the exhibition?

D.W.P.: [Points to “The Artist’s Two-and-a-Half-Year-Old Daughter With a Boat.”] This in an incredible portrait. When you see the works in real life, the colors are so surprising, almost fluorescent. It’s striking to see that the colors are still so fresh today. They were shocking in his time, and they’re still kind of shocking today.