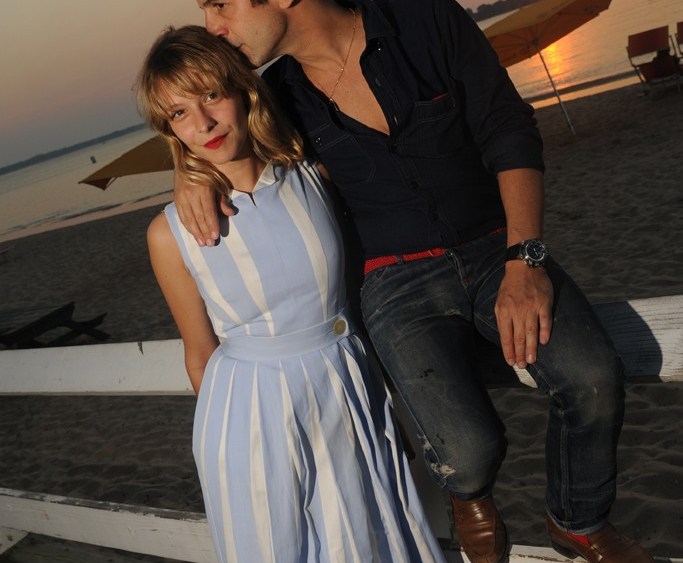 The scene at Sunset Beach on Shelter Island in New York on Friday night, at a dinner thrown by Harry Winston in honor of its new Ocean Sport collection, had a distinctly Sud de France feel — not least due to the plethora of Gallic accents in evidence. Guests gathered in the gravel-lined courtyard space to survey glass vitrines holding the brand’s new timepieces or to sit on navy beach chairs with white piping, shielded from the sun’s last rays by Veuve Clicquot umbrellas in their trademark orange hue. Waiters wore sunglasses and the striped marinière tops André Saraiva had designed in conjunction with Saint James for The Standard hotel chain last summer. Above the cocktail party in the terraced gardens between grape vines, an 80-foot white table (it was custom-built for the occasion) topped with arrangements of antirrhinums and geraniums in blue and white awaited dinner guests under lanterns and lit torches. It felt a little like a very chic wedding.

“Do you think they’re raffling off the watches?” one partygoer asked, dangling his business card over an empty Perrier-Jouët bucket. They weren’t.

The party was cohosted by Saraiva, the nightclub impresario and graffiti artist, who squired Annabelle Dexter-Jones (gamine in a vintage blue-and-white striped dress, pink Charlotte Olympia loafers and a slick of red lipstick). As the sky darkened, guests made their way through the tall reeds to the dinner table. “Let’s go make some memorable moments,” Dexter-Jones laughed. Waris Ahluwalia dallied, playing a rousing game of table tennis before joining guests like Johan Lindeberg, Hilary Rhoda, Allison Sarofim, Stuart Parr and the bandmates of The Virgins (who were to perform directly after the meal) along the banquet table. Harry Winston president and chief executive officer Fréderic de Narp pointed out that Rhoda was the last person to wear the famous and allegedly cursed Hope Diamond (his company donated the 45.52-carat stone to the Smithsonian Museum of Natural History in 1958, but had the model wear it to celebrate the 50-year anniversary of the event). Talk at the table turned to previous owners and wearers of the piece, who met such varied ends as being “torn limb from limb by a murderous mob,” “imprisoned and tortured” and “torn to pieces by wild dogs in Constantinople.” Rhoda seemed embarrassed by the attention but unworried about the potential of an untimely demise.

As the dinner wound down, the band began itching to start their set.

“We’re headed back to the city straight after this,” drummer John Eatherly said. “They don’t have a room for us, so if we miss the last ferry I guess we’re sleeping on the beach?”

Parr located the microphone, and seated, began to sing Otis Redding’s “(Sittin’ on the) Dock of the Bay” in its entirety, to mixed reviews.