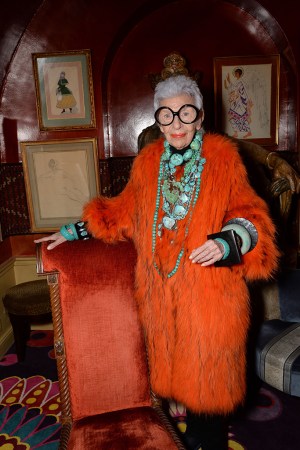 A IS FOR APFEL: Park Avenue’s bird of paradise Iris Apfel landed in London this week for the U.K. premiere of the documentary “Iris,” a tale of her late-blooming fame in the fashion world, and her love of fabric, costume jewelry — and her husband Carl.

While most of Apfel’s career was spent globetrotting, decorating grand interiors and running a high-end fabric business, she had an early brush with fashion working for Women’s Wear Daily in the Forties.

“Back when the dinosaurs roamed, when WWD was on 13th or 14th Street and there was no technology — only pneumatic tubes — I worked there. There were drudges called copy girls, and I was one of them,” said Apfel before the dinner she hosted at Annabel’s following the screening on Wednesday night.

Earlier in the evening Apfel, who turns 94 in a few weeks, held forth on a variety of topics during a question-and-answer session with Lisa Armstrong of The Daily Telegraph.

Apfel admitted she spends “half my life looking for things” in the clothes and accessories-packed Park Avenue apartment she shares with her husband, and that once she came upon a 45-year-old pair of trousers “with the tag still on them.” Like Woody Allen, she said she can’t shop at retail, adding: “It’s against my religion.”

Apfel also held forth on the digital age, admitting that online shopping was not for her, saying: “I could never buy anything I couldn’t touch. Well, maybe a bed sheet,” and that she is “very opposed” to social media.

“It’s carrying narcissism to a ridiculous degree. What you had for lunch is none of my affair,” she said. “Why are people so interested in the nooks and crannies of other people’s lives?”

On that note, Apfel said she almost didn’t agree to do the documentary, which was directed by Albert Maysles. “But then Linda Fargo [director of women’s fashion at Bergdorf Goodman] laid me out, and told me I had to do it. ‘Who the hell do you think you are to say no?'” Apfel recalled Fargo telling her.

She will be taking part in another documentary set to come out in a year or so. “It’s about vitality after 90, with Mel Brooks, Carl Reiner, Dick Van Dyke and Betty White. Even if it’s a stinker, I’m sure it’ll do well,” said Apfel.