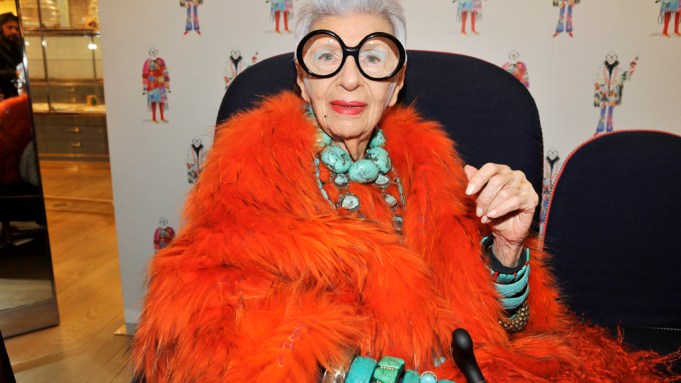 “I love [Paris]. I used to come twice a year for furniture. I haven’t come in 10 years,” Apfel told WWD, sitting on a sofa while receiving guests one by one. “Everybody is so kind. The ambassador is organizing a cocktail on Friday, [Azzedine] Alaïa is cooking dinner on Saturday. I know he’s going to make bricks; it’s one of his specialties.”

So does Apfel relish being an international star?

“Dries’ show was fabulous,” she said. “I have Rick Owens tomorrow and Dior on Friday.” On Thursday, she’s also to attend a lunch hosted by U.S. Ambassador to France Jane D. Hartley in support of equality for International Women’s Day, with guests including Monica Bellucci.

Despite such a busy schedule, she managed to drive around Paris, stopping in at 7L, Karl Lagerfeld’s bookshop, where she got a tome on Suzanne Belperron. Apfel also was pampered with a facial at Darphin and savored a cheese soufflé at Récamier.

A trip to the Saint-Ouen flea market, where in years past she used to bargain hunt, is a possibility if only Apfel can find the time.

“I heard it has become much more expensive,” she lamented. “Paris hasn’t change architecturally, but people and places have.”

Apfel called Parisians’ style “chic and perennial but not daring enough for my taste.”

Posters for her exhibit are plastered on newspaper kiosks throughout the city. Additionally, as the newly tapped brand ambassador for carmaker Citroën’s DS, Apfel appears on a giant billboard on the Avenue des Champs-Elysées, as well.

“I am doing a shoot for Aigner in New York,” she divulged.

Apfel has other upcoming collaborations, as well, including a silver and wood jewelry collection for Tane, of Mexico and a capsule for Happy Socks.

“I have a lot of businesses in the pipeline,” she confirmed.

“When I heard she would come to Paris, I thought I really have to see her,” said the designer, who commended Apfel for her youthful sprit. “I think she inspires every fashion designer. She uses clothes to express who she is.”

“She’s the embodiment of originality,” added Linda Fargo, senior vice president, fashion office and store presentation at Bergdorf Goodman, who has created windows for and with Apfel in years past.

Bidermann and Laure Hériard-Dubreuil enthused about their FaceTime and photo op with her.

“She’s an icon,” said Bidermann, who is presenting her new jewelry collection inspired by Ancient Greece and the Cyclades today through Saturday.

Apfel’s exhibit includes window displays and a pop-up store with cabinets showcasing 10 outfits she put together for various activities in the French capital, including going to a gala, fashion show and museum. Among items for sale are oversize sunglasses from Selima Optique, a men’s bow tie by Cinabre Paris and necklaces by Marion Vidal. Limited-edition items include notebooks, a scarf, an umbrella and a mug.

The exhibit runs through April 16.