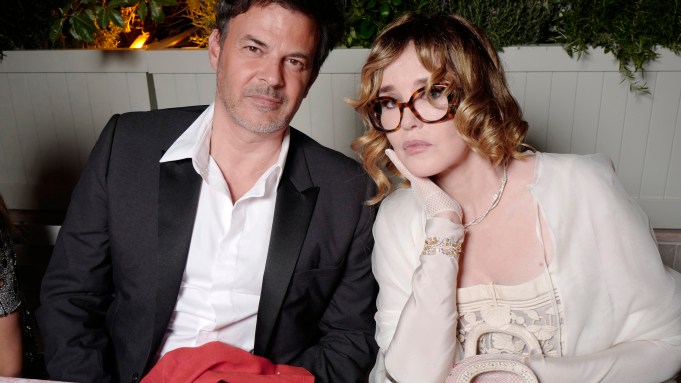 CANNES — Independence day isn’t until July, but freedom was in the air at the Dior dinner Saturday night at Club Albane. The vibe was electric yet relaxed, far above the crowds of the Croisette.

“I hope we can enjoy a new era of parties and spontaneous moments of life,” said Pierre Niney, in town to present his film “Masquerade.” It’s the best of both worlds for Niney, since the film is in the official selection but not in competition. “It’s a good thing — I have all the fun and enjoy the good things about [the festival] but I don’t feel too much stress or nerves.”

Niney, a longtime ambassador for Dior, started his own production company and has a series and feature film in the works. He’s also getting ready to start shooting a new film from “Eternal Sunshine of the Spotless Mind” director Michel Gondry in which he plays a version of the director.

“It’s gonna be nuts. It’s about him but in the most crazy way and it’s going to be unprecedented,” he said. It’s a combination of live action and animation in the eclectic Gondry style, he said.

Ana Girardot also started her own production company and was seen carrying around a GoPro camera for a documentary project. The “Fires in the Dark” star directed her first short film last year and is in the process of writing and producing her first feature film.

“I’m into ‘get it done girl by yourself,’” she said. “Not by yourself really, because you need a lot of people to make a movie come together, but to do your own thing. Let’s see each other again in three years and I’ll be like, ‘Yeah, I did it.’” Festival artistic director Thierry Fremaux should be ready, she added.

Iris Law said she is feeling bolder with her fashion and wore a beaded black mini set from Dior. “I just try to follow my gut and wear clothes that make me happy and make me feel confident, and not try to follow trends or do what’s going to fit in.”

“Because obviously with modeling there’s a lot of things that you can’t do for a job because you are becoming a canvas for a brand. But in my free time I’m trying to express myself, so on my weeks off doing like something with my hair or something [else] because otherwise it’s easy to be put in a box. I’m trying to regain my autonomy.”

Rebecca Hall demurred, citing nonexistent jury rules, but enjoyed a cocktail — “I can’t do anymore Champagne,” she said. Guests including Isabelle Adjani and Casey Affleck took in a poolside piano set from French singer Juliette Armanet and danced the night away.