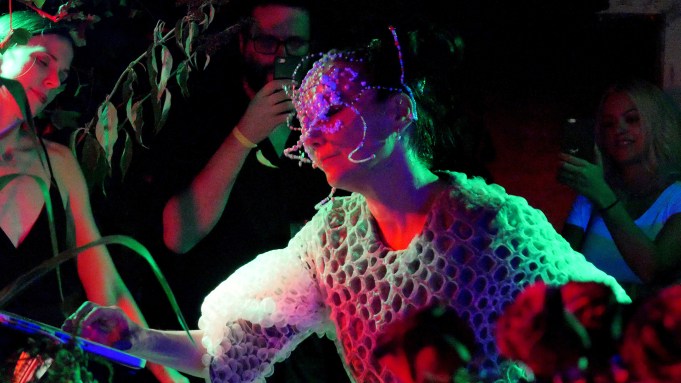 SPARKLING CELEBRATION: “Yo yo yo!” Daphne Guinness exclaimed as she fell into the arms of Dutch avant-garde designer Iris van Herpen at the cocktail presentation of van Herpen’s crystal designs for Swarovski. The friends were wearing matching Noritaka Tatehana heel-less shoes, but that’s where the outfit-matching stopped. The designer wore a pale green kimono she found in Kyoto; Guinness wore hers with a light gray morning jacket and sparkly trousers.

“I always am crystallized,” Guinness said. “Anything shiny makes me happy, as simple as that.” The couture collector had swapped the Irishness of the studio where she was recording her second album, to be called “It’s a Riot” and to drop in the spring, to immerse herself in the “Iris-ness” of the day.

“One can’t compare designers but the closest person to Iris is Alexander McQueen, the sense of theater — it’s not a fashion show, it’s a world you enter into, a completely transformative experience,” she said. “You come out of there not feeling the same about anything again, really. It’s such an ethereal…closer to what we should be wearing in the 21th century. Really forward-thinking. Beyond.”

As a model made a polka-dot kaftan move under the light in the closed interior courtyard, the Growing Crystal, an imposing lozenge with its heart left unfinished — growing or retreating was left to the viewer’s imagination — glittered in the darkened room, admired by model Coco Rocha.

The crystal focused van Herpen’s thoughts on her milestone anniversary and on her place in the City of Light. “Looking back, there are memories at every step, but coming to Paris was the most important one,” she reminisced. “It is the place where fashion and art can connect, where craftsmanship has its history and still its value. For the next 10 years, I really hope to continue combining other worlds into fashion and sharing knowledge across disciplines.”

She was looking forward to taking a breather in Southern Italy to clear her mind and reconnect with her main source of inspiration, nature. “New projects already exist in my mind, not physically [yet],” she said.

“She’s giving us headaches and nightmares,” joked Taro Nordheider, chief executive officer of the Swarovski Professional branch of the 123-year old crystal manufacturer. “Her creativity is not easy to bring into the physical world, whether her designs or the 3-D Studs or Growing Crystal she designed for us. It’s a challenge for our production and product development team, and ultimately in the glass work itself, but we relish that.”

To top this day of aural discovery, the fashion set congregated at Salo, a purposefully dilapidated club a stone’s-throw away from David Lynch’s Silencio. Earlier in the day, the designer had wowed the audience with shimmery, weightless aquatic creations accompanied by the eerie music of Danish underwater group Between Music.

Model Soo-Joo Park kept the crowd in a holding pattern by mixing a steady stream of dance-provoking tracks. The anticipation was killing everyone — would longtime van Herpen friend and aficionado Björk appear as announced?

Feline eyes encircled by a beaded mask could be glimpsed behind the DJ station before the singer appeared wearing an organic honeycomb of a dress. Flashes lit the stage like day light as Björk mixed a brutal melodic soundtrack for an audience that included Julia Restoin-Roitfeld, perfumer Francis Kurkdjian, the French fashion federation’s executive president Pascal Morand as well as a cross-section of the industry.

A girl in a body-con Dior off-the-shoulder dress danced with characters with painted faces and flamboyant outfits, and the cool kids in oversized hoodies and combat boots nodded along.

Tilda Swinton and Haider Ackermann held hands with friends as they wove out of the dense crowd. Milliner Stephen Jones sipped out of a plastic cup. “Plastic, paper, I can do anything,” he joked with Filip Arickx and An Vandevorst for whom he had created the bag lady chic headwear seen at their latest A.F. Vandevorst show.