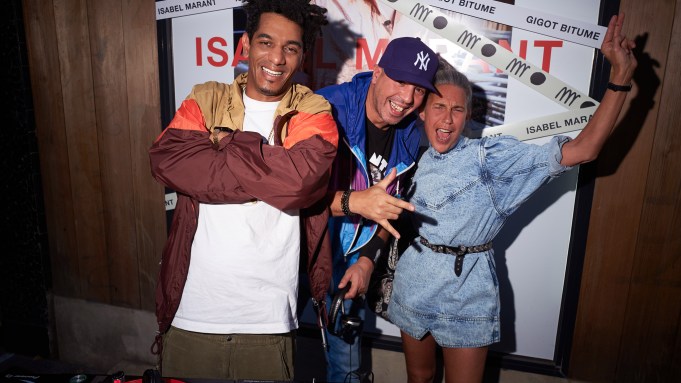 ROASTING PAVEMENT: Isabel Marant jump-started celebrations for her upcoming men’s store in Paris — it will be the first — hosting a street party at the site with DJs Cut Killer and Richie Reach.

Marant mingled with guests, a beer in hand, showing off her deep tan in a short, acid-washed jean dress. The store will likely open in September, she said.

A Champagne bar and beer tap were on hand — tucked in the back of the store, which is still a construction site — served with black-ink colored cheese and charcoal bread. The theme of the party was ‘gigot bitume,’ a reference to the tradition of cooking a leg of lamb wrapped in asphalt to celebrate a construction site. The only thing happening on the pavement here was dancing, though.

Partygoers danced on the street in front of the store, spurred on by a sizzling performance from the electro dance troupe Alliance Crew, who twirled their arms and twisted their bodies to the beat of the music.

Less familiar with the brand, they could describe the designer, and said they found Marant personable and welcoming.

“It’s always cool to dance outside, the weather is nice, the ambiance was fab,” said Larrazet. It was a different scene than the packed stadiums where he had performed in previous weeks — accompanying the boy band BTS, which explained his bright blue hair dye. He was still enjoying it — a symbol of freedom, he thought — though the Smurf jokes were getting a bit old.