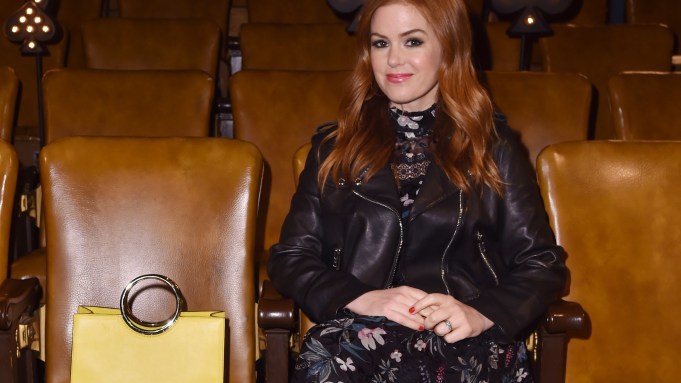 “This is my first fashion week ever, believe it or not,” said Lucy Hale from the Grand Lodge, where Kate Spade New York was hosting a presentation of its latest collection. “I have always been filming during fall and typically during this time. I’m off now, so I thought I’d come out. I always love coming to New York for the food and shopping and stuff, but it’s kind of a busy trip, so it’ll be fun.”

The actress, who last summer bid farewell to her “Pretty Little Liars” character with the series finale, will be returning to TV on March 7 in the new CW series “Life Sentence.”

“It’s very scary to start something new after ‘Pretty Little Liars,’ but [‘Life Sentence’] was such a nice departure from that; it was really different, character-wise, for me,” she said. “It was really fun creatively to get to bring a new character into the world, and I fell in love with her. It’s such a special show, it has a lot of heart to it.” What’s it about? “A dysfunctional family — which I’m sure we can all relate.”

Hale also stars in the film “Truth or Dare” out April 13, and is in limbo to see if “Life Sentence” will return for a second season. “The nature of TV, we may come back we may not. So if we do I’ll come back in the spring and we’ll do another season, so fingers crossed on that,” she added.

While Hale continues making the rounds during fashion week, NYFW was a one-stop occasion for Isla Fisher.

“I’m just in and out. I’ve just come for today, and I’m home this afternoon,” said Fisher, before talking up her outfit. (Kate Spade, of course.)

“I have to say, I really love these shoes. They put a cheetah on the back of them, they’re so sweet,” she said, glancing down at her heels. “When you’re a school-run mom, you’re in sweatpants most of the time so you can do some exercise after drop-off. It’s just nice to put on a floral dress and feel like a lady,” she added.

Fisher’s year ahead includes promotion for studio comedy “Tag” and the Harmony Korine-directed “Beach Bum.” Beyond that, it’s still up in the air. “Hopefully shooting something; I’m not sure yet what. I’m just kind of deciding,” she said. “I really want to work, but it has to fit in with the family and that’s always hard logistically.”

Logistics: the complications of which any fashion week-goer can understand.