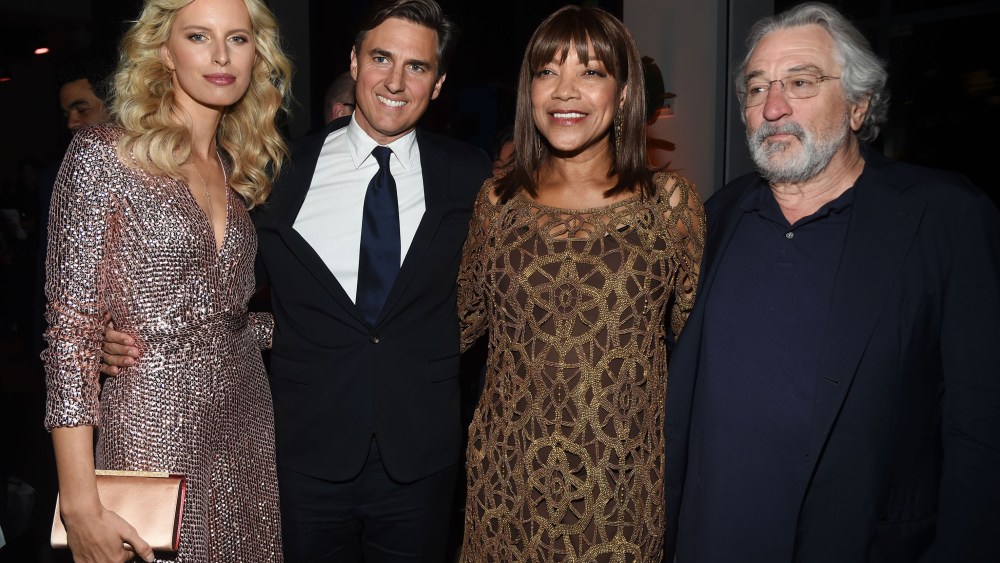 “I’m very happy to be here; I love TriBeCa,” said Uma Thurman as she hurried past print reporters, blowing them a kiss as she rounded the corner inside Spring Studios on April 20. She wasn’t the only one who didn’t have time to stop and gab about the bling strapped to their wrists, lent to them by IWC Schaffhausen — Adriana Lima, Christina Ricci, and Zosia Mamet were all in a rush to get inside the candle-lit venue, transformed for the watch brand’s fifth annual “For the Love of Cinema” Tribeca Film Festival dinner. The annual event awards grants to emerging filmmakers to help them finish their works in progress; the first place winner received $50,000 and yearlong mentorship through the Tribeca Film Institute.

“I really love to be on time,” remarked Rosamund Pike. “I think my relationship with IWC has made me a better timekeeper, interestingly enough. It’s made me appreciate it and honor it. Now my time has become precious, I’m very aware of wasting other people’s time.”

“Definitely working with IWC makes me very punctual,” agreed Karolína Kurková, who had chosen a sparkly rose gold watch to match the rose gold hue of her sequined jumpsuit. “That’s the good thing with working with IWC, you get to have a nice watch collection,” she said, before adding that she’s up for sharing the love. “I can switch with my dad, [we] borrow each other’s watches. I’m the same with my husband….It’s nice that we can share accessories.”

Not everyone gets to walk away with their timepiece. “It’s not actually mine,” Taylor Schilling said of her watch for the evening. Oh well, she always has her cell phone. The actress has a film in the festival this year, and was excited to be part of the action. “When I was in school in New York, [Tribeca Film Festival] was such an important part of the calendar of the city,” she said. “To be part of it, to be inside of it, feels really cool.”

Festival cofounder Robert De Niro was the last VIP to arrive, taking his seat with wife Grace Hightower De Niro near the stage, where they had a prime view of Tony winner Cynthia Erivo’s post-dinner performance. Just past 10 p.m., the evening concluded with an impressive rendition of Chaka Khan’s “I’m Every Woman” — not that anyone had their eye on the time.