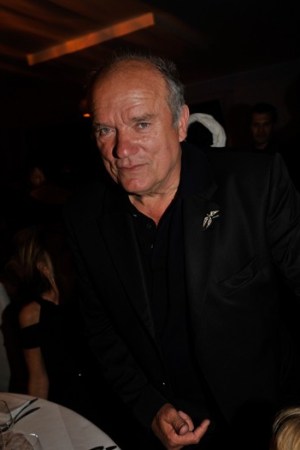 Lindbergh said his next project is a book with the Bolshoi Theatre, featuring photographs of the multi-billon-dollar renovated site. “They redid the whole complex,” he said. “I liked everything behind the scenes. What is so great about the Bolshoi is these kids already at school when they’re [knee-high], and there’s only one thing in their head: they want to dance for the Bolshoi, and that is so heartbreaking and so amazing.”

Joining fellow IWC ambassador Boris Becker, Matthew Fox had flown in from London for the dinner. “It’s my only night off from the theater,” said the actor, who is currently treading the boards in Neil LaBute’s “In a Forest, Dark and Deep.”

Actor Djimon Hounsou, who is presenting his first film in Cannes, said he is also seeking financing for a personal film franchise project he’s been working on for some time, called “Thulsa Doom,” based on a comic book by Robert E. Howard, who also created “Conan the Barbarian.” Glamorous European poker tour champion Liv Boeree, who said she dreams of one day being a Bond girl, shared tips on the game. The card pro explained that the biggest advantage of being a woman in her profession is that men underestimate her.

“Interestingly, the place I had my biggest success was in Italy, they just didn’t know how to play against me,” she said.

“They really couldn’t handle it and I would sort of smile at them, and then I’d bluff and they’d be like, ‘Grrrr,’ and one of them kept winking at me trying to distract me. Places like that where there’s a machismo culture, women do very well.”