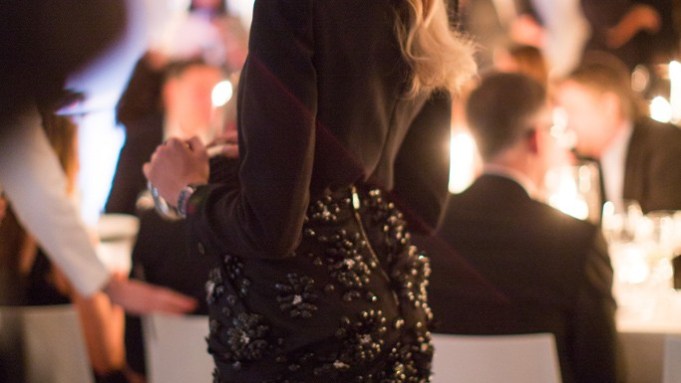 As the Tribeca Film Festival got underway in earnest, so did the retinue of after parties and dinners to keep filmmakers, actors, producers and jurors occupied when not in screenings or sitting on panels. Add to the list this year Swiss watchmaker IWC Schaffhausen, which held a dinner at the Urban Zen Center on Thursday night to celebrate its new “festival time” sponsorship of the proceedings.

“I’m going to need you to keep it down,” the actress scolded. “I’m focusing. I’m focusing right now.”

Before sitting down, Justin Long considered the very nature of the festival.

“You know what’s interesting is that with most festivals you find the whole town rallies behind it,” he said. “It becomes about that. The entire town — whether it’s Park City, Sarasota [Fla.], Vail. But New York, it’s just so…I don’t imagine that that’s the case. It’s just like a thing going on.”

Asked for his farthest flung festival experience, Long told of having traveled to the south of France to cover an international TV festival for E Entertainment Television as a guest correspondent. He seemed to enjoy his time on the other side of the microphone.

“I always had a fantasy of being a sports reporter and interviewing guys after the game, cause you know all those questions are so rote and the answers become equally,” he said. “So instead of saying ‘What was your game plan?’…I’d want to be like ‘So was there anyone in the crowd that you made eye contact with that you felt maybe a sexual energy from?’”