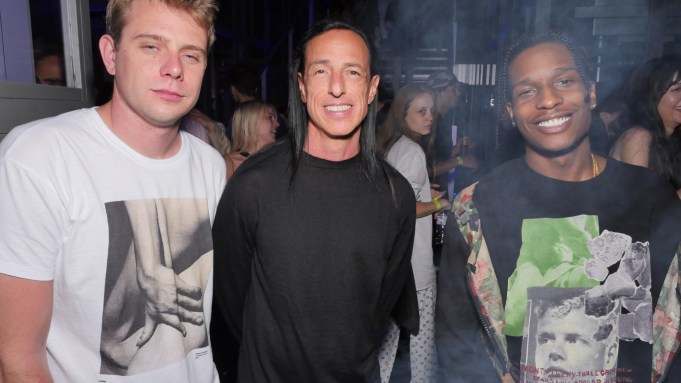 “I decided to let my hair down this season. This started as a team party but grew to include everyone,” Jonathan Anderson said as the crowd grew more compact at his “Fire of Youth Summer of Loewe” party, celebrating the brand’s spring 2018 collection which was presented earlier in the day.

His fellow designers were certainly eager to fête him. “He’s given me the freedom to explore men’s wear in a non-traditional way,” said Alejandro Gomez Palomo, who took the same men’s wear course at London College of Fashion and showed what he called a pre-collection the previous day.

“What [Jonathan Anderson] is doing for the crafts movement, the support he is giving to craftspeople” is what drew Rick Owens to the party — he too fresh from his show earlier in the day. “He’s a great positive influence, and that’s why I support him so much,” the veteran designer said, before being pulled into the pulsating heart of the party by Michèle Lamy.

Smoke curled along the floor of the lower level of the Institut du Monde Arabe. Posters, designed by M/M, art directors Michael Amzalag and Mathias Augustyniak, hung from the rafters. Some dared all and some bared all, as horned creatures crossed paths with scantily clad cross-dressers. The Loewe party was turning into a school-night-appropriate version of Burning Man.

SEE ALSO: Mirror Image: Jonathan Anderson Looks to His Own Style for Spring >>

Most, though, were preoccupied by the T-shirts printed with the Steven Meisel images that were being handed out. The imagery Anderson has created for the Spanish brand was the reason for the night’s celebration. “Those M/M posters? You can take them too, but I haven’t told anyone yet,” Anderson said with a laugh, as he disappeared into the throng of revellers.

“I’d get one,” said sound illustrator Michel Gaubert, pointing to a red print he liked. He numbered all the things he loved — summer, love, Loewe, Jonathan [J.W. Anderson], Steven Meisel — before adding that he’d just arrived and was waiting to feel the love.

Eyewear designer Thierry Lasry, fresh from the presentation of an exclusive new design for cult nightspot (now also a hotel) Les Bains, eyed the posters speculatively. “With the right frame, that blue one would look great in my showroom,” he said.

Despite a busy weekend coming up with a pop-up store with Miami-based concept store Alchemist alongside Chrome Hearts, Readymade and others, and eyewear for the upcoming Enfants Riches Déprimés collection on Sunday, he was determined to step out for the evening. “Now that temperatures are more bearable, we’re not ready to go home,” he laughed. “And everyone’s in Paris.”

His brother Leonard had his mind on music: he is giving a concert for the 40th anniversary of cult French magazine Façade on July 2, and the record he composed for couturier Hervé Léger Leroux is due to be released today at Colette.

Others just grabbed the opportunity to cut loose for the evening. Taking a breather away from his Helmut Lang duties, Shayne Oliver showed off some dance moves, but didn’t take any questions.

He wasn’t the only one looking for a quick fix of fun during this round of shows. With the presentation of Vlone, the A$AP Mob’s clothing label looming ahead the next day, A$AP Rocky slipped out, as discreetly as one can with a dozen-strong entourage.

Paris Men’s Sizzles — In More Ways Than One

New and Noteworthy Additions to the Paris Calendar