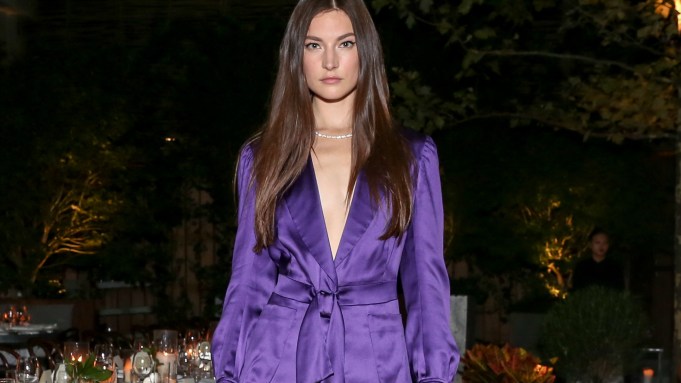 Attendees were welcomed at the hotel’s Bowery Garden restaurant for a break from the fashion week hustle to raise funds for her charity, Autism Tomorrow. The non-profit organization aims to provide housing, job opportunities and high-quality living accommodations for adults living with autism.

“My brother, Tommy was diagnosed with autism at the age of two and is the one who motivated me to make a difference. After I moved to New York, I began to play a more active role in the discussion around autism. Through my brother and his experiences, I noticed that no one was talking about the adults on the spectrum,” said Jablonski. “What happens when schooling ends at age 21? The one in 68 kids diagnosed with autism today, will be the one in 68 adults with autism tomorrow. These adults cannot be ignored. I was forced to take action, which is when I launched the foundation Autism Tomorrow last year.”

The fashion industry has taken an extra interest in philanthropic efforts as of late. Take supermodel and girl-coding champion, Karlie Kloss. Like Jablonski, Kloss has used her platform not just for side-gigs (though she does that, too); she promotes and participates in efforts like the hurricane relief effort, Hand in Hand, which she shared through her booming social media channels last night.

With their bubbling Instagram accounts, models have an at-attention audience to share their extracurricular activities and efforts. Behati Prinsloo and Candice Swanepoel also come to mind here — they’ve each promoted respective good deeds via social, commonly with an environmentally friendly twist.

“I’m so grateful that I can use my platform as a model to raise autism awareness. Social media has been a great way to have a voice and interact with people personally related to the cause,” she said. “It makes me so happy to hear others who share similar stories to my mine. People in the industry have also been so supportive and have reached out to get involved. It is so nice to see people from my work wanting to be active and make a difference!”

What was in store for Jablonski following the event? A cat nap, perhaps. “I take naps whenever I have a free second [during fashion week]. It saves me! I’ve also been having whole coconuts from the juice place next door,” she said.

Purple Magazine Parties at Top of the Standard