The actor paid a visit to Gucci's men's boutique in New York on Monday. 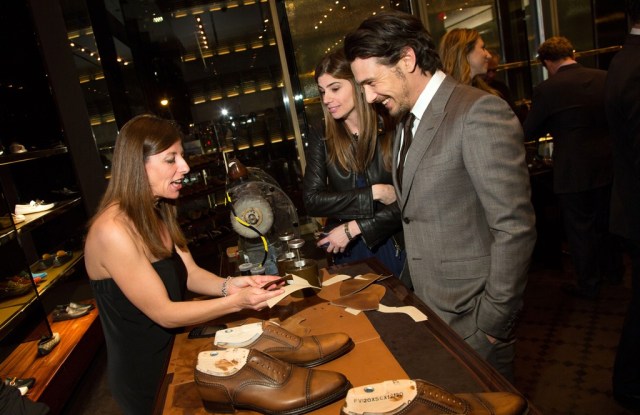 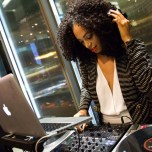 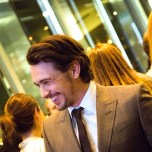 James Franco, continuing standard-bearer for the Hollywood renaissance man, is an actor, visual artist, writer, director and current Yale Ph.D. candidate. He is not a speaker of Italian.

“They speak great English,” Franco said Monday night at Gucci’s Fifth Avenue men’s boutique in New York City as he watched a woman in a leather apron stitch together a pair of size 42.5 shiny brown cap-toe oxfords. The Italian house had imported a few of its shoemakers from Florence to demonstrate its made-to-order shoe service at a cocktail party on the store’s second floor, where clients were also getting a look at the spring made-to-measure suit collection. Solange Knowles was DJing. Franco, who serves as the face of the suit campaign, wore a nicely fitted suit and shiny brown tie. Upon arriving, he seemed more interested in the cobblers than the party, peppering them with questions as they worked their trade.

“I guess what I could say is, I do a lot of things,” Franco said of the irony of his curiosity in so single-minded an artisanal pursuit. “There’s certainly something to be said for putting a lot of time into a single craft and really honing your craft. I really appreciate that in any field, but we do live in an age where computers can basically do everything for us. I think that is one of the reasons that I do like to engage in so many different kinds of crafts. For me, it’s as much about craft as it is about concept….I do appreciate craft; you know, I went to acting school for eight years.”

He also went to film school. In fact, his New York University master’s thesis, “The Broken Tower,” a biopic of the poet Hart Crane, had seen a small theatrical release the week before. Two weeks before that, Rizzoli published a book of Franco’s work as a visual artist, “Dangerous Book Four Boys.”

“I guess in a sense I was the cobbler for, like, 10 years of my career,” he said with a smile. “All I did was act and put all of my energy into acting, and I think I became a better actor because of that, but it got to a point where I realized: Oh, I don’t want to only make shoes. Sometimes I want to design a suit or… get out of clothes all together. So that’s when things changed. Which isn’t to say that I don’t still love acting or don’t put a lot of care into my roles when I do act. But I think I’m only able to do that now because I have other interests that satisfy the things I wasn’t getting.”