The 75-year-old artist enjoyed a Los Angeles moment this week. 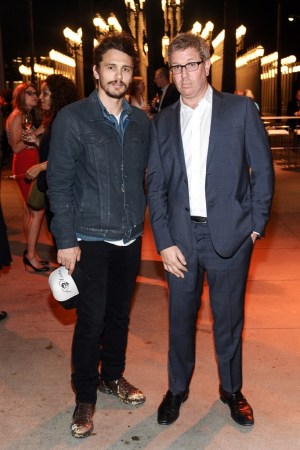 A worldwide James Turrell barrage began last week in Los Angeles with the opening of the 70-year-old artist’s retrospective at Los Angeles County Museum of Art on Wednesday, the first major U.S. survey of his five-decade career since 1985. On its heels are an exhibition at the Museum of Fine Arts, Houston June 9 and the Solomon R. Guggenheim Museum June 21, Academy Art Museum in Easton, Md., and Villa Panza in Varese, Italy.

Not that exposing the public to holograms, light projections, sky spaces and ganzfelds is a bad thing. On the contrary, Turrell has managed to put both private art collectors and the public in that elusive altered state of mind through his perception-bending light and space works. His secret? “I’ve figured out how to bottle and sell the blue sky,” he joked of his art, which harnesses the natural light so plentiful and sought after among Los Angeles creative types.

At the unusually packed preview on Wednesday morning, Turrell said, “I had become LACMA intolerant for a while, as a lot of people have, but I got over it.” Turrell is good friends with LACMA chief executive officer and Wallis Annenberg Director Michael Govan, who has piloted his own plane to visit Turrell at his masterwork-in-progress: “Roden Crater.”

Later that evening, a crowd including James Franco, Marc Glimcher, Joe Goode, Hugues de Pins-Vacheron (his family’s watch company underwrote the opening), Viveca Paulin-Ferrell, Wendy Stark, Bradley and Colleen Bell, Donovan Leitch and Lynda Resnick filled the two LACMA venues housing the 50 works. It was one time Hollywood types patiently waited in line (and not for a photo op), as several of the works were limited to a handful of viewers at a time. “I heard the wait to get into some things is, like, months long,” said interior designer Alison Blumenfeld, in line with her partner, “Fashion Star” producer James Deutch. There is, in fact, a waiting list for the single-viewer work “Perceptual Cell” that stretches into August. While viewers were schooled by museum guards during the preview for taking photos or getting within two feet of some of the pieces, at the opening, the curious nosed up against some of the cutouts and holograms. “As long as they don’t put their body parts inside anything, it’s OK. When there are 20 people in here at a time, I can only raise my voice so much,” said one guard.

Guards were absent the next night at the long-awaited opening of Kayne Griffin Corcoran gallery, which features many permanent elements conceived by Turrell, including the skylights in the main galleries, the courtyard (down to the trellises and trees) and a sky space in its conference room. “Doing the white cube thing that they do in New York just didn’t interest me,” said the gallery’s creative director and co-owner Maggie Kayne. “Los Angeles has so much more to offer in terms of light and space, which was why we wanted to collaborate with James.” Timed to the 8:05 p.m. sunset, the conference room was open for a “sunset show” utilizing both colored LED lights and the sky. As guests like Scott Sternberg, Liseanne and Peter Frankfurt, Cameron Silver, Jessica Joffe, Moby and Yvonne Force Villareal gazed upward, still more mingled outside and in the galleries, where the historic survey titled “Sooner Than Later, Roden Crater” made its debut. “This reminds me of the old days when gallery openings were cool, indoor-outdoor events,” said Marin Hopper, recalling the art heyday of her late father Dennis Hopper. “It’s such a great L.A. moment.”