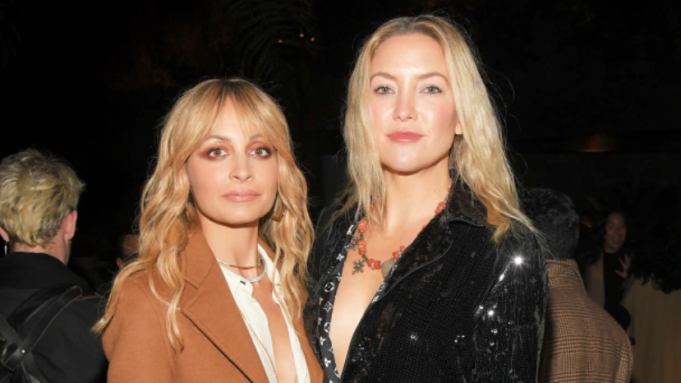 “Is it Sushi Bar or The Sushi Bar?” Jamie Mizrahi asked, turning to Joel Madden.

It’s the name of the reservations-only, 17-course omakase concept owned by husband-and-wife chef duo Phillip Frankland Lee and Margarita Kallas-Lee — creators of the anticipated menu for the night. Courtesy of Louis Vuitton, held to celebrate its latest Artycapucines collection, it was an intimate get-together on Wednesday evening at a John Lautner-designed residence in the Hollywood Hills of L.A. The sit-down dinner, poolside in the backyard, overlooked the cityscape.

“It’s with a sake pairing tasting,” Mizrahi explained, as guests chatted in and outside the home during the cocktail hour, sipping on Champagne and whiskey. “It’s not just dinner, it’s an experience. I love this restaurant, and it’s so fun to be talked through every course.”

The powerhouse stylist, who works with the likes of Katy Perry and Adele, was the evening’s cohost alongside friend, model and Kora Organics founder Miranda Kerr.

“I want to say we met through Katy and Orlando probably, mutual friends, and I think both of our separate relationships with Louis Vuitton brought us together to be, like, ‘Oh, it would be fun to bring all of our friends together and come together to celebrate the brand and these artists and do something that felt interesting and easy,” Mizrahi went on. “I think it’s more about the ease of everyone getting together and knowing each other.”

They mingled, catching up and admiring the bags on display in the living room; as part of an ongoing collaboration with contemporary artists from around the world, the luxury French house presented the third installment of its Artycapucines collection, with six additional artists — Paola Pivi, Zeng Fanzhi, Vik Muniz, Donna Huanca, Huang Yuxing and Gregor Hildebrandt — offering their respective designs, using the Capucines bags as canvases (named after Rue Neuve-des-Capucines, the Parisian street where Louis Vuitton himself opened his first store in 1854). The pieces, a limited edition of 200, are available for $8,860 each and will be released in stores worldwide on Oct. 29.

She was dressed in Louis Vuitton head-to-toe (a sequin number paired with chunky, silver Amazigh-made jewelry) — as were all the VIPs.

Penn had on a black minidress with knee-high leather boots. “I’m going to try to steal these,” she joked, looking down at her feet.

The 30-year-old actress will next be seen in “Flag Day,” playing opposite her father, Sean Penn, who directed the film. Her brother Hopper, too, worked on the project.

“It’s a family affair,” she said. (Their mother is Robin Wright.)

“It was wild,” she continued, of the experience on set. “I mean, I was really nervous leading up to it, and then day of, my nerves were set to rest. Because he’s an actor, he knows how to direct actors, and to play with him, obviously our own s–t comes up playing father-daughter, so actually it was really easy to play off emotions of one another.”

Her relationship with Louis Vuitton is relatively new, she admitted, and she got to know its team after attending a dinner the brand hosted during the 74th annual Cannes Film Festival in July.

“It was great food,” she said of the event, at Fred L’Ecailler in the South of France. “Food really brings me out,” she added, with a laugh. “Oh, omakase sushi? I’m there.”

Kerr was also looking forward to the meal, she said. She was inside, getting photographed alongside the Capucines bags.

“I love the kangaroo on there,” Kerr, born in Australia, said, pointing out the detail on Muniz’s playful design. “I think that’s really cute.”

Reminiscent of home? “Yes, of course.”

A longtime friend of designer and women’s creative director Nicolas Ghesquière, having worked with him during his days at Balenciaga, it was a no-brainer to host the occasion, she said (and offer goodie bags stuffed with Kora Organics’ turmeric scrub and moisturizer, made in glass jars with refillable pods).

“I love this collection,” she said of Artycapucines. “This one is mine,” she added, dangling her white Capucines purse in hand. She’s had it for about six months. “It’s just so easy and versatile, and it just makes any look feel elevated and chic. You can dress it up or down.”