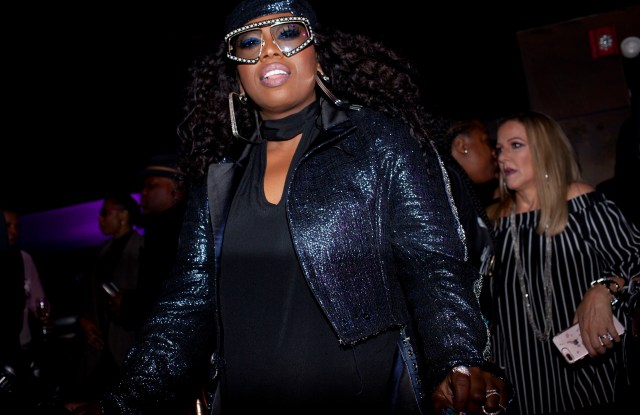 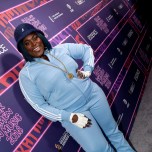 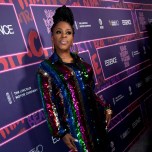 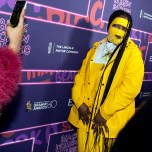 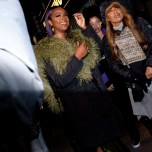 “She’s always proudly lived in her own skin,” continued the “Orange Is the New Black” actress who has her own line of plus-size clothing called The Tria Collection. “As someone who’s been curvy and doesn’t have any desire to be a size 2, I’ve always admired her not shying away from her talent because of her size.”

But praise of the multihyphenate entertainer extended well beyond her healthy body image. Comedian Phoebe Robinson, whose podcast-turned-television series “2 Dope Queens” premieres next week on HBO, explained how Elliott’s ability to stand toe-to-toe with her male industry counterparts has inspired Robinson’s own success.

“For every black girl growing up you saw her just being such an individual,” gushed Robinson. “To see someone be a boss like that, own her career and be really successful I thought if she can do it, then maybe I can too.”

“She’s not afraid of anything and that’s what an artist should be,” observed actress Naturi Naughton. Singer Justine Skye also applauded the 46-year-old’s fearlessness, saying, “She’s a risk taker, she breaks barriers, sets trends and inspires the music I make.”

But Skye, who revealed she won’t be attending the Grammys until she is “nominated for something,” isn’t always as calm and collected as Elliott — especially when encountering her musical idols. “[Missy] makes me really nervous, like everyone I look up to,” revealed the 22-year-old Brooklynite. “I get super nervous every time I encounter Beyoncé. I just freeze up and I don’t know what to say.”

Jillian Hervey, one half of the electro soul duo Lion Babe, was slightly more composed when she first encountered Elliott, by phone, after a gig in New York’s Greenwich Village. “One of her dear friends said Missy had been watching [our career] and wanted to reach out so [her friend] called her. She’s so genuine and chill. I’ve been trying to cross paths with her for a minute,” explained Hervey before finally coming face-to-face with the supportive rapper.

Janelle Monáe, stylists June Ambrose and Misa Hylton, designer LaQuan Smith, rapper Slick Rick and media mogul Mona Scott-Young were among the throng of well-wishers who cheered as the woman of the hour made her triumphant entrance while, on stage, a brass band played a rendition of “Oops (Oh My),” her 2002 collaboration with the artist Tweet.

“I feel blessed and so honored,” remarked a visibly humbled Elliott, who kept cool with the help of a battery-operated handheld fan. Donning an iridescent pant suit and matching head wrap, the Virginia native perched herself atop a Louis Vuitton suitcase that had been placed on a banquette as Leikeli47 and Rapsody performed a medley of her hits including “Hot Boyz” and “She’s a B—h.”

But the show-stopping moment of the night came when Janet Jackson surprised the crowd — including a tearful Elliott. “Some women sing, some produce, some rhyme, some rap, some act, some choreograph, some write hit songs, some create whole new sounds. Some are able to make their mark on these fields, but there’s only one woman who has made her mark in all of these fields,” Jackson said to the celebratory room.

The “Control” singer, in a sequin sweater by Philipp Plein, went on to express gratitude of Elliott for “[clearing] the path for new generations of young talent,” while adding “I’m so very grateful for her loyal friendship.” Wiping tears from her eyes, Elliott took the stage to accept her award with a stirring and heartfelt off-the-cuff speech that quickly validated all of her earlier praise.

“I wouldn’t want to be any other color but black,” asserted Elliott after firmly embracing Jackson. “I’m black and I’m proud. There’s something about our DNA that can’t be taught.”

Revealing that Jackson’s nickname for Elliott is “Jack,” the four-time Grammy winner said, “[Janet] always has this soft, soothing voice and the times I may have felt like giving up she always gave me an encouraging word.”

Elliott revealed the strength she sought after being diagnosed with Graves’ disease in 2008, which set off tremors that caused her to nearly crash a car and temporarily prevented her from using a pen. “Everybody don’t believe in God, but I’m a walking testimony,” she declared. “I didn’t come up here in no wheelchair. Nobody helped me get up here. I walked up here, but it was through the grace of God.”

The rapper continued her inspirational message, adding, “I want all of you women to know you are beautiful. You’ve got to know that you’re beautiful and you’ve got to believe in yourself because there are going to be times that people tell you [that] you can’t do it or you don’t look the part.”

Amidst intermittent calls of approval from the vocal crowd, Elliott closed her 10-minute-long speech with one last bit of advice she’s learned by experience: “I want to say be humble. In this industry, a relationship is more than a check. As long as you keep a great relationship, you will always get a check because they will always consider you when things are down for you. They will always remember how you made them feel.”