ACRIA hosted the Unframed art auction and a dinner on Tuesday night. 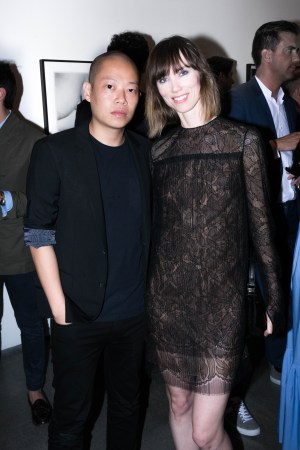 Guests were getting a deal at Tuesday night’s young friends of ACRIA event. The organization had combined its two spring fund-raisers — the Unframed art auction and summer soiree — effectively giving attendees a two-for-one party.

For the first, Unframed, attendees had packed into the Paula Cooper gallery to bid on art priced well below market value via Paddle 8. “It is what it is. I beg on the board to change the paradigm of the art auction, but ‘everybody’s doing it.’ It becomes a feeding ground for collectors, like ‘oh, maybe I can get a bargain,'” Jack Pierson said. He himself contributed a large-scale photograph to the cause. “That’s mine over there, the clouds with the blue,” noted Pierson, motioning to a nearby wall. “Easy breezy. People like the pretty colors.”

Many of other donating artists were circulating, including Zoe Buckman, Daniel Zeller and Liz Nielsen. They’d all contributed works to ACRIA, which provides treatment and education programs for people living with HIV, and the night’s event was directly benefiting the Artists Ending AIDS Fund.

Jason Wu, the event’s main host and one of ACRIA’s biggest supporters, could be found taking selfies with his cohosts and mingling with Max Osterweis, Erin Beatty and Kate Foley next to an ocean chalk drawing by Zaria Forman. The roof was leaking a few feet away, unintentionally adding to the art’s ambience.

“I’m not a huge art collector myself, but I appreciate art very much. I’ve acquired most of my art from ACRIA events,” Wu noted. While the designer hadn’t yet placed a bid for the night, there were a few pieces he was eyeing in the room. “There’s a couple private ones I want,” he offered. The designer (and newlywed) has been involved with ACRIA for several years, and recently graduated to the organization’s main board. “Now that I’m 33, I think it’s good to be a little less selfish. I’m happy to be on the main board now and work on issues that are very real and very threatening today, and also to connect and bring people together. Our goal is to get younger people involved in these things.”

Afterward, the party moved two blocks south for part two: another cocktail hour and seated dinner at The Park. Guests who had forgotten to place a bid earlier discussed which pieces they hoped to buy in the after-event market — unsold pieces are available to purchase by contacting ACRIA directly.