Diane Kruger, Calvin Klein and Raf Simons were among the presenters at the dinner supporting HIV and AIDS research and prevention. 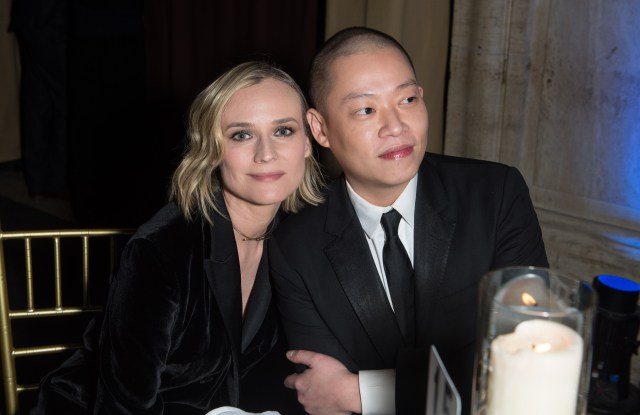 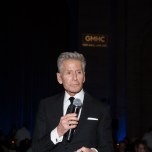 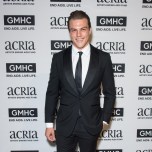 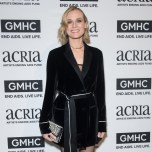 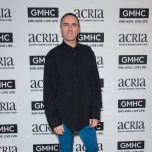 Bleckner, who helped found the nonprofit in 1991 to research, educate and prevent HIV and AIDS, was among the evening’s honorees at the fund-raiser held at Cipriani 25 Broadway’s majestic Italian Renaissance-style building in lower Manhattan, which was originally built as the Cunard Line’s grand ticketing office.

“Tonight is [Ross’] night and I’m happy to be here for him,” remarked Calvin Klein who later stood in the center of the towering room to present his friend with ACRIA’s Founders Award. “He’s really passionate about this organization.”

For his part, Bleckner noted the progress seen over the course of ACRIA’s 27 years, saying “it’s getting a lot better” in terms of education and prevention of the virus, which was once a death sentence for many. “When I first heard about it in the Eighties it was a really scary time,” the painter recalled. “It was dark. It’s dark now, too, but in another way: politics. There’s not one thing that’s happened in the last year that has not freaked me out when it comes to politics.”

Also honored was designer Jason Wu, who was presented with the Young Leadership Award by pal Diane Kruger. The German-born actress, standing beside a glowing white Christmas tree, laughed at the commonly mispronounced inflection of the organization’s acronym, which stands for AIDS Community Research Initiative of America. “By the way, it’s ‘ah-CREE-ah,'” she noted. “I’ve just learned tonight.”

“I’m really proud of Jason,” continued Kruger, who wore a short black wrap dress from her collaboration with Grey by Jason Wu. “He’s a young designer who’s raised a lot of awareness in the fashion industry about [this cause]. He’s really living the example.”

Approaching from the bar, drinks in hand, Wu playfully exclaimed, “Everything she said is true. It’s all true.” Lack of humility notwithstanding, the 35-year-old spoke passionately about the charity he has long supported. “To be honest, I [first came to an ACRIA event] because my friend said hot boys are always going to these parties,” he said. “But it’s been really amazing to be a small part of something that’s so important.”

The Taiwan-born creative noted that “education about people’s health and well-being is so important especially now.” But how does Wu stay healthy, particularly during the busy holiday season? “You’re not going to expect this but cryotherapy,” he revealed of the subzero process used to treat tissue damage. “I go a couple of times a month — it heals sore spots, gives you energy and makes the skin tighter so it’s all pluses in my book.”

Judith Light, glittering in a sequined Michael Kors pantsuit, was honored by the organization last year for her tireless support of the LGBT community and those living with HIV and AIDS. The actress, who flew in from a film shoot in Winnipeg, Canada to attend the dinner, said ACRIA’s support is “beyond any kind of description.” This year, the nonprofit has formed a strategic partnership with the Gay Men’s Health Crisis, a similar organization that Light noted was “there at the very beginning [of the AIDS epidemic].”

Raf Simons and Peter McGough presented the Artists Ending AIDS Award to photographer Anne Collier and artist Matthew Higgs. “I guess I have to speak now,” said the Calvin Klein chief creative officer in his introduction to the crowd. “I know both [Anne and Matthew] very well and I consider them family. I just moved here one and a half years ago and both of them made it possible [for me] to find a new home here.”

Among the dinner’s other 400 guests were Dennis Basso, Gillian Hearst Simonds, Hope Atherton, Jeremy Kost, Frank de Biasi, Gene Meyer, Michael Lorber, Kelly Rutherford and Donna Karan. But for Bleckner, who served as ACRIA’s president for 17 years, the night was dedicated to those who were there only in spirit.

“We lost a lot of people [to AIDS],” he added solemnly. “There are two people I think about a lot — a Swiss art dealer named Thomas Ammann and the great fashion photographer David Seidner who was a dear, dear friend. They’re both here with me tonight.”

They Are…Congregating at Sant Ambroeus and Bar Pitti