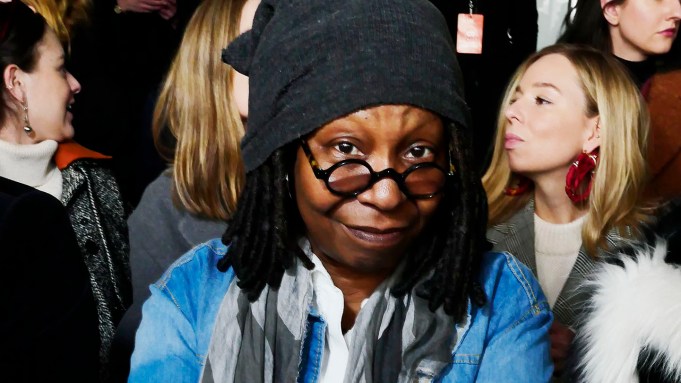 What led Whoopi Goldberg to the front row of the Jason Wu show at Spring Studios on Friday afternoon?

“Uh… it’s Jason Wu,” offered Goldberg, with a chuckle. “I mean I’ve known about him for the past thousand years, and he actually came on ‘The View’ when we first hit. And I’ve always been a fan, so I’m lucky enough to know some folks and they said, ‘Hey, come to Jason’s show.’ And I was like, ‘OK!’ So here I am.”

It won’t be her last show of the season; Goldberg has plenty more on her plate. “We’re going to R13 and — where else am I going?”  she said, turning to her seat mate.

“We are going to Cushnie et Ochs, and I have to look…we have a bunch scheduled. We may go to Chromat,” offered the gent.

“Yes, we may,” Goldberg added. Perhaps something she sees will inspire her own clothing designs. After two years of designing holiday sweaters, Goldberg is looking to expand into wares for warmer weather.

“I’m gonna try to make some things I can wear when I go on vacation, for women with a bit of a butt, and mismatched chest,” she said. “We still wanna look kinda cute on the Riviera.”

Larsen Thompson also has a busy week ahead. “This week is crazy, yesterday was insane. This week is amazing, and it’s my favorite week of the whole year; it’s worth it,” she said. “I look forward to just seeing the new fashion trends,” she continued. “Other than that, I’m just excited to meet new people. I’ve met so many new people; it’s just awesome.”

A few seats down, Virginia Gardner noted that it was one of the few shows she’d be attending this season. “We wanted to be really selective,” she said. The actress may be conserving her energy for a busy spring ahead.

“I’m going back for season 2 of Marvel’s ‘Runaways’ in April, and then I just wrapped the reboot of the new ‘Halloween’ movie, so that’ll be out this Halloween.”