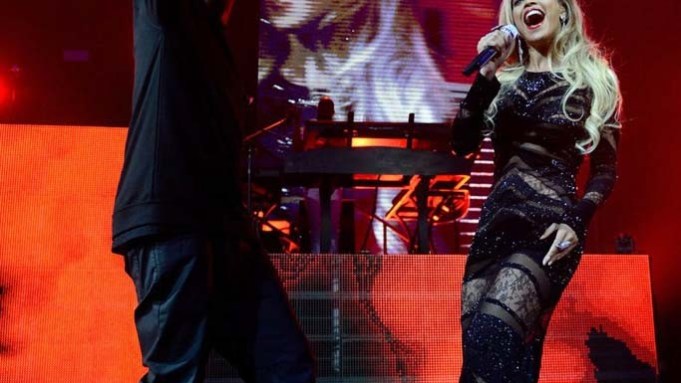 The night didn’t start out well for DirecTV. Due to a “technical malfunction” the Super Bowl party, which took place here at Pier 40 on Saturday night in a massive converted warehouse turned mega club, started an hour late.

Hundreds of party-goers huddled outside the venue next to football-inspired ice sculptures until security let them into the two-story space.

Once inside, flashing lights, black couches, gigantic crystal chandeliers, dancers, small bites and beverages awaited guests, as Tiesto, deejayed behind a booth near the empty stage.

But people were there for that stage — or rather to see Jay-Z perform on it — and his wife, Beyoncé, who was rumored to make an appearance.

In the meantime, guests also had the added bonus of bumping into a celebrity or athlete, and there were quite a few milling about, including, Jamie Foxx, Kate Upton, Spike Lee, Gayle King, Ashanti, Laverne Cox, Drew Brees, Nina Dobrev, James Marsden, AnnaSophia Robb, Mark Cuban, Lindsey Vonn and Robert Kraft.

Their hopes would be dashed, as VIPs were escorted upstairs to a private area to (literally) peer down on attendees, many of whom, still sported their coats once inside due to the cold temperature of the venue.

But never mind that.

Jay-Z wound up rocking the place when he finally took to the stage with his opening remix of Just Blaze and Baauer’s “Higher.” The rapper unfurled some classics, “Big Pimpin'” and “99 Problems” before Beyoncé burst onstage, wearing a sheer-paneled floor-length long-sleeved sparkly black dress. Guess she was cold, too?

The couple kissed, thrilling the audience, both above and below, and proceeded to belt out a few songs.