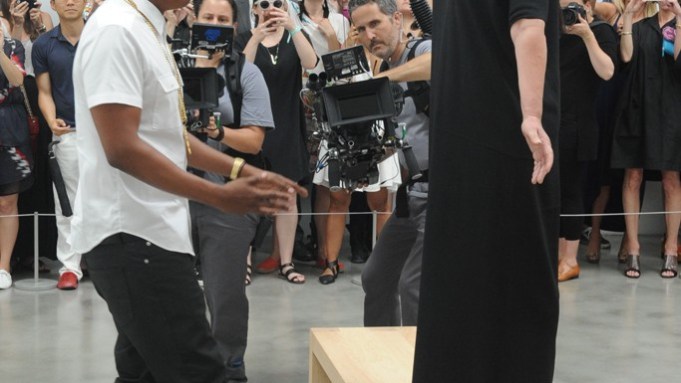 In the last several years Jay-Z, having reached his 40s with a net worth of half a billion dollars, give or take, and possessing the clout of a small multinational corporation, has gone the way of many a Master of the Universe before him. He has enlisted some top-notch consultants and cracked that highest strata of consumer culture, the contemporary art market.

Or, as the younger and lesser-known rapper Wale put it at New York’s Pace Gallery on Wednesday afternoon: “It’s the evolution of a man. You go from like shoes and jewelry to cars and homes to traveling and now it’s art. You know what I’m saying? It’s natural. It’s not forced, like his friends are into this s–t.”

Wale was but one in a cast of thousands (well, 1,588 official RSVPs, according to one staffer on set) at the white-wall space for the six-hour video shoot for Jay’s “Picasso Baby.” The song, from his just-released 12th solo album, “Magna Carta…Holy Grail,” is a celebration of Jay-Z’s headfirst dive of late into the art world. It begins with the line, “I just want a Picasso, in my casa…” and builds on the theme until he is instructing his young daughter that it is OK to lean on the Basquiat in the kitchen; they own it. Occasionally he wonders about the addictive nature of collecting and the passing nature of ownership, but the boasts comparing his home to the Tate or the Louvre are the main attraction. And from the sound of things, he knows it. There is a pretty funny wordplay involving turkey bacon and Francis Bacon.

Not content to merely consume and brag, on Wednesday Jay-Z was making his own performance art. With the help of gallerist Jeanne Greenberg Rohatyn, the veteran music video director Mark Romanek and several p.r. firms and/or casting agencies, the rapper planned a six-hour repetitive performance of the song at the gallery. An edited version of the performance will eventually serve as the song’s video.

The setup was indebted to Marina Abramovic’s marathon staring contest at the Museum of Modern Art in 2010. Jay-Z, standing on a small raised platform wearing jeans, a white short-sleeve Theory button up and gold chain, would perform the song to one person at a time on a bench until a security guard tapped the viewer out and another stepped in. The production company shuffled in a new audience every hour or so, at which point everyone took a 20-minute break. The spectators were meant to be a representative sample of the art world peppered with a host of street style-savvy twenty- and thirtysomethings.

When their number was up, each viewer could apparently do whatever they pleased. At the end of each performance, Jay would call the whole iPhone-waving crowd in around him in a bouncy circle. The proceedings had a loose air about them, which was unexpected for a semipublic event involving a top-10 world recognizable pop star.

Among the artists, Mickalene Thomas performed what appeared to be a modified shadowboxing routine; Dustin Yellin break danced; Ryan McNamara handpicked 10, 11 and then 14 audience members ringing the space to break the rope line and join him; Marilyn Minter did a mom-at-a-wedding dance; Lawrence Weiner just sat and watched. As for the other VIPs, Judd Apatow plopped there with the galleys of the new Andres Dubus 3rd novel like he was waiting for the bus; the actor Adam Driver looked on stoically while New York Times critic Jon Caramanica stood on the bench next to him; Jemima Kirke shook her hair and gave some sass back. She did not cry, as she had in an Internet-famous photo of her attending the Abramovic MoMA show.

At around 3:15 p.m. Abramovic herself showed up and a weird hush took over the gallery. The song began once again and she approached the bench, taking her shoes off then belt along the way. Her arms were spread at her sides. Once she got close enough to Jay-Z, she pushed her forehead into his every chance she got. If it seemed a touch melodramatic, it also made for the first time all day he appeared at least a little uncomfortable. It begged the question: How often on any given day could Jay-Z possibly feel uncomfortable? She gave him a great big hug at the end.

“How did it look?” she asked when finished.

WWD offered that he had looked slightly cramped.

Around 6 p.m., as the production was beginning to wind down, Diana Widmaier Picasso, a New York-based art historian and Pablo Picasso’s granddaughter, took her place on the bench and quietly looked on.

Asked later for her assessment, she noted that Jay-Z had both “an incredible charisma and a very light presence somehow.”

WWD asked if she thought he had known who she was.

“No,” Widmaier Picasso laughed. “But I knew.”