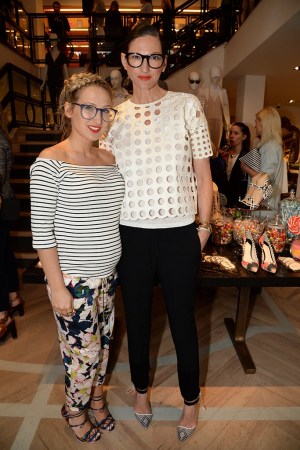 WEBSTER’S WAY: Sophia Webster and Jenna Lyons transformed J.Crew’s South Kensington store into a party pad on Wednesday night to mark the footwear collaboration, Sophia Webster for J.Crew. The 13 colorful, whimsical styles are made in Webster’s own factories and sold online and in some J.Crew stores.

During the party, the shoes were displayed among jars of candies and cookies, and like most sugary snacks, it didn’t taken them long to disappear. After just a week on the shop floor, most of the styles have already sold out. Prices range from $320 for a printed pump to $695 for a nude and metallic Riko shoe.

Webster said the collaboration began with an email out of nowhere. “Jenna told me that she was in Saks [Fifth Avenue] and needed a pair of shoes to wear to an event. She picked up a pair of my Riko heels [a lace-up, peep-toe, Aztec-style shoe boot]; she’d never heard of me before,” said the designer.

“Next thing, I got an email from J. Crew asking if I’d be interested in working together, then I did their shoes for their presentation in New York in September.”