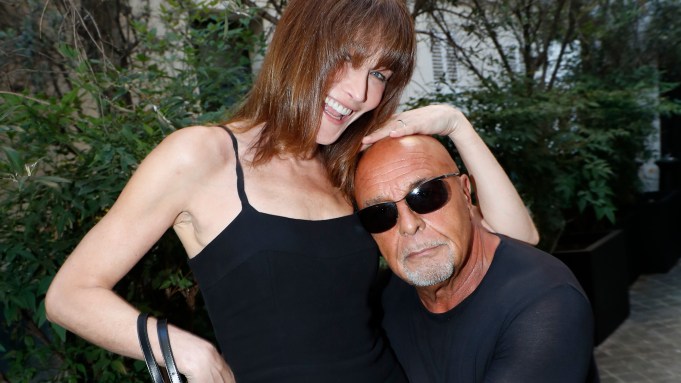 That’s pretty much what happened on Thursday evening at the Studio des Acaçias in Paris, where Numéro magazine had organized an exhibition celebrating 20 years of creative collaboration with Jean-Baptiste Mondino, known for having photographed all the biggest stars.

Running until July 20, “Mondino Numéro” features 100 photographs taken by Mondino for the French fashion magazine over the last 20 years, including iconic shots of Lagerfeld strumming away on an electric guitar or Björk posing with a taxidermy polar bear.

French actress Virginie Ledoyen is one of the many faces that have posed for Mondino over the years.

“He knows exactly how to capture your personality,” she said, whose next film “Notre Dame,” directed by Valérie Donzelli, will be out in December. “There is always a lot of freedom, but he still manages to guide you.”

The star of the evening hung on Numéro editor in chief Babeth Djian’s arm as guests clustered around to congratulate him, from Mulberry creative director Johnny Coca to Alber Elbaz and even former French first lady Carla Bruni-Sarkozy.

“We’ve known each other for more than 20 years actually — I think we met at the liberation of Paris, along with Karl Lagerfeld,” joked Mondino about his relationship with Djian.

“I have so many fun memories of collaborating with Babeth and Numéro, I feel like we are constantly together” continued the photographer, who is also known for having directed music videos for Prince, Madonna and Vanessa Paradis.

“I remember so much laughter and so many accidents on shoots. The good thing with accidents is that over time they turn into beautiful memories. When things all go smoothly and you’re sipping rosé near the pool — those situations hardly create lasting memories.”