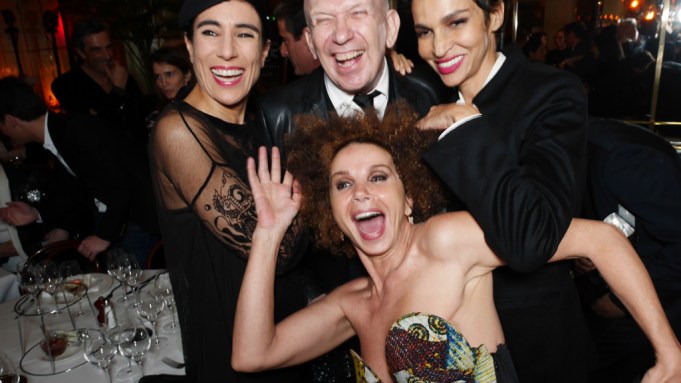 One voice rang out above the crowd — that of Beth Ditto. She had come to town specifically for the designer’s show earlier in the day. The Gossip singer shared what she likes best to do in Paris.

“Eat butter,” Ditto said with a laugh. “Why is the butter amazing? It’s like eating cheese. Museums are good…butter’s better.”

Ditto added that she’s at work on a solo record and readying the launch of her plus-size fashion line, which is due out in February.

Earlier in the evening, before Ditto was lifted on to the restaurant’s zinc bar to serenade guests, waiters wheeled in two covered dishes that contained not appetizers, not main courses — but talking heads. Two women (whose bodies were literally out of sight) carried on a disjointed conversation in various languages across the room, before being concealed by covers and whisked away again.

It was, indeed, surreal: A contortionist painted gold plied her craft on the bar as a welcome to guests. One waiter walked on extreme wedged shoes. Gaultier tried on a wig, and someone with red-glittered lips popped out of a cake with lighted candles to mark the Jean Paul Gaultier fashion brand’s 40 years.

Then the evening evolved into a dance fest, after each guest was given a cardboard mask (with an image of Gaultier’s face) to sport.

Alongside four decades in fashion, 2016 marks the first year the Gaultier fragrance label is being developed by Puig. And on Thursday, the house revealed to journalists the debut advertising campaign under its purview.

The film version, shot by Miles Aldridge with Dvein, will break Friday worldwide with a 47-second spot.

The television ad is for both Jean Paul Gaultier fragrance blockbusters — Le Male for men and Classique for women. Its backdrop is a factory but, of course, with a twist à la Gaultier. While all of his iconography is evident — think women in corsets and men sporting striped shirts — the setting is industrial.

A sailor throws a lever (that’s his size) of the mechanism. Actual women roll out on conveyor belts, and robots handle the perfume bottles. The spot features models Daphne Groeneveld and Chris Bunn.

Gaultier said the factory theme goes back to his “high-tech” collection from the late Seventies and the spirit of the tin-can packaging he chose to hold his fragrances (taking the form of busts) from the start.

“It was like a body in conserve, that was the idea,” he said. “So [with the ad] it’s a little like coming back to the essence of the can, and the industrial way it’s done. It is at the same time humoristic and futuristic. The factory is like a paradox with couture — which is good.”

Aldridge also lensed the still single page ads for each of the scent.