The fashion world gathered on Monday night for the Sapins de Noël auction, and an AIDS benefit at the couturier's headquarters earlier in the evening.

By Miles Socha and Laure Guilbault on November 24, 2015
View Slideshow 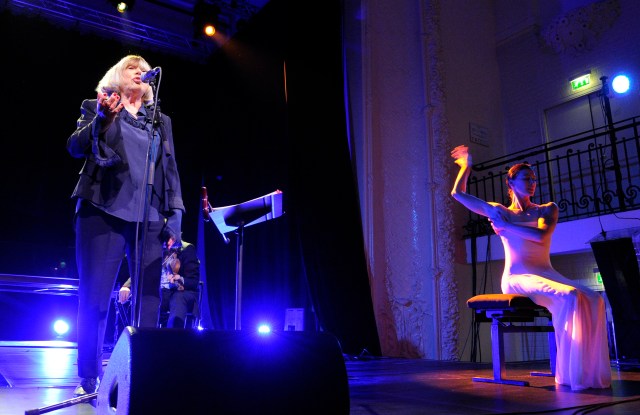 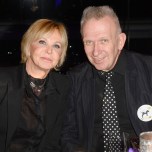 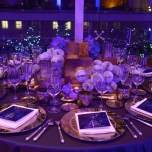 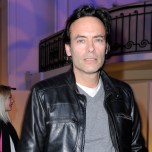 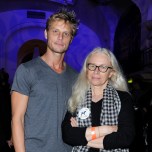 PARIS — A flurry of pine-scented bubbles greeted guests at the Sapins de Noël charity auction on Monday night at the Théâtre des Champs-Elysées in Paris.

Eager to raise as much money as possible for cancer research and care, the auctioneers assured bidders that one lot — a Jean-Claude Jitrois dress in bands of stretch metallic leather — would expand to almost any size.

“Don’t exaggerate,” teased fashion journalist Marie-Christiane Marek, the force behind the popular event for the past 20 years.

Bids crept past 5,000 euros, or $5,312 at current exchange rates, for one-of-a-kind trees by the likes of Dior, Chanel, Nina Ricci and Jean Paul Gaultier, who studded an old wooden wardrobe door with thousands of green Swarovski crystals and propped it on a tree trunk.

Ralph Toledano, president of the Fédération Française de la Couture and Puig’s fashion division, drove up the price of the Ricci tree, a triangle of golden metal strung with hundreds of delicate chains.

After the sale, Gaultier, Marek, pastry chef Pierre Hermé and a host of fashion folk repaired to the Maison Blanche restaurant for a lavish dinner of oyster vichyssoise and duckling cooked two ways.

Fashion photographer Ali Mahdavi arrived late at Gaultier’s table, intricate curlicues inked above his eyes, prompting the designer and other guests to wonder if he had tattooed them permanently.

“No, look, you can just peel it off,” he demonstrated, praising the stick-on designs of makeup artist Phyllis Cohen. “It’s called Face Lace,” he noted.

Earlier, Gaultier hosted an AIDS benefit at his headquarters in Paris.

Jitrois, Martine Sitbon, Marc Ascoli, Jean-Baptiste Mondino, Pascal Humbert, Anthony Delon and Claire Chazal were among the guests who turned out to support Dr. Jacques Leibowitch, who is battling to get official backing for his method named Intermittent, in Canny short Cycles, Antiretrovirals may Retain Efficiency, or ICCARRE — a mode of anti HIV-AIDS drug prescriptions that allows HIV carrier patients to reduce their intake of antiHIV cocktails and limit side-effects.

The victims of the recent Paris terrorist attacks weren’t forgotten.

French actor Jacques Weber read a commenter’s ode to Paris, attributed to The New York Times, that took off on social media platforms.

“It was very nice of him to do it. It’s his day off, he’s performing in ‘L’Avare’ at Théâtre Dejazet near République,” said photographer Dominique Issermann, who rallied a team of 30 volunteers for the event.

They included the troop of former models, such as Violeta Sanchez, Claudia Huidobro and Axelle Doué, who performed in Olivier Saillard’s “Models Never Talk.”

While Sanchez and Huidobro were posted at the entrance, Doué was pouring drinks and François Hebel, former director of the Rencontres d’Arles photography festival, was at the coat check.

Gillot said it was important to participate in the event despite the recent Paris events. “We shouldn’t be scared. We need to keep our freedom and culture,” said Gillot, who had changed into a black Gaultier gown. “I dance near where the attacks happened at Opéra Bastille. We had just finished the rehearsal of ‘La Bayadère’ that night. You don’t have your phone on the stage. It was such a shock.”

The ballerina is now rehearsing for a new show featuring pieces by Pina Bausch, Wayne McGregor and Christopher Wheeldon that will open in December at Palais Garnier.

“Don’t come close; I caught a cold,” Gaultier advised. A guest recommended a ginger concoction. “Does this work? This is an aphrodisiac, right?” the designer joked.

Gaultier, who lost his partner Francis Menuge to AIDS in 1990, described Faithfull’s performance as “fabulous.”

Sitbon has a Rizzoli book on her work set for release in October 2016, and she’s working on a capsule collection for spring 2017.

Two of the survivors — artist Aurèle and vocal coach Richard Cross — took to the stage to testify with candor and humor about an experimental protocol for treating the virus that has helped them beat the odds, despite having been infected at the start of the epidemic three decades ago.