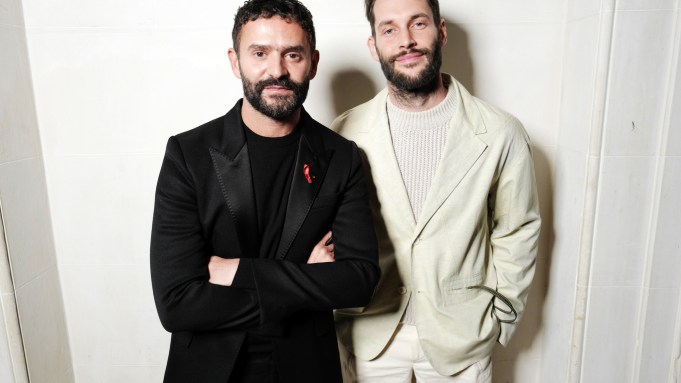 At the Sidaction gala dinner on Thursday all anyone could talk about was the designer’s final couture show, held on the previous day at the Théâtre du Châtelet.

“His last fashion show was just like his entire career: a real party,” said actress Béatrice Dalle, who also graced the runway for the historical show. Dalle pointed out that the event was a real celebration of French culture, with appearances of cultural icons such as Mylène Farmer and Amanda Lear. “I think French designers should take a leaf out of his book — if you have a French brand, then celebrate France!”

Anna Cleveland didn’t walk the show, but was there to cheer the designer on. “It’s such a beautiful moment to be able to take off the mask and reveal that we are all here to celebrate life,” said the model. “Everything comes to an ending, but it’s worth it. Also, Jean Paul is like a rock star — there is never going to be an end for him.”

The dinner, organized in partnership with the Fédération de la Haute Couture et de la Mode, is also a moment for designers to relax, catch up and have a bit of fun once couture week is over.

Guests included Julie de Libran, Bouchra Jarrar and Guo Pei, who were all relieved that the shows were over and done with for this season. Everyone discussed the best way to relax after an intense show season.

“I like to watch musicals with my daughter Jacqueline,” said designer Vanessa Seward, who came with her husband Bertrand Burgalat and close friend Vincent Darré.

Guillaume Henry, creative director of Patou, was torn between two options. “Either I like to go away on holiday somewhere, or just chill at home in front of the television,” said the designer. “At any rate, I try to see my friends and laugh as much as possible.”

Rushemy Botter and Lisi Herrebrugh, creative directors of Nina Ricci, learnt a new French word this season: “Trottinette,” quipped Herrebrugh, which is the French word for electric scooter, their transport of choice during the Paris strikes.

The duo got their big break at the Hyères festival, where they took home the Grand Prize in 2018. Had they heard who the president of this year’s jury is going to be?

“J-dubs!” exclaimed Botter, in reference to JW Anderson. “He is a great choice for Hyères. We only have good memories from our time there. It’s like family.”

Amira Casar discussed her next role in an upcoming French film. “I’m having super fun. I play a gynecologist in Neuilly in the Eighties,” she said.

Isabelle Pannetier (of “120 battements par minute” fame) designed Casar’s costumes for the film. The actress revealed she only works with English wigmakers, such as Ray Marston. “Every time I do a film, like ‘Versailles,’ I needed these,” she said. “They’ve got my measurements. We style it, they send it, we recut it. They’re the best. The English are great with wigs because they really know how to do the tulle so that it doesn’t show.”

Perfumer Francis Kurkdjian has many projects on the go. A new fragrance, L’Eau de la Rose, will be introduced in two weeks’ time.

“The play with Isabelle Adjani is ongoing,” he said, referring to Cyril Teste’s “Opening Night,” for which he scents both the actress and the theater. “That is going abroad — if everything goes well — in Asia.”

Also upcoming for Kurkdjian is the opening of a new shop in La Samaritaine department store in March and a new men’s scent and a boutique on Paris’ Left Bank, in June.

The crowd flocked to their assigned tables just as Gaultier arrived to greet Line Renaud, vice president of Sidaction, where he was met with a flock of photographers. The evening ended with a fashion tombola with all proceeds going towards the Sidaction: 780,000 euros were collected that night.