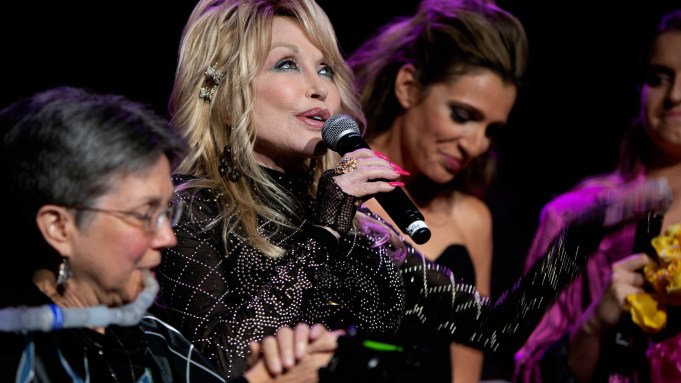 “I’m almost driven to tears tonight,” Nile Rodgers said on Tuesday at the Hammerstein Ballroom. “But I have to act like the president.”

The musician was at the annual awards ceremony for the nonprofit organization he founded 18 years ago, the We Are Family Foundation. His reason for getting choked up: his good friend Jean Paul Gaultier, along with the country musician Dolly Parton, were being honored.

He and Gaultier have a long history — the two have worked together for many years, and most recently, Rodgers made the music for Gaultier’s revue-slash-runway show, “Fashion Freak Show.”

“The tears I’m holding back are because, at the end of his stage play, he told his story [about] his struggles, what he had done and who he was as a human being,” Rodgers explained, referencing the first time he watched “Fashion Freak Show.” “We ran to him, and my attorney said, ‘You have to be the We Are Family humanitarian honoree.’”

Gaultier brought out friends Coco Rocha, Larsen Thompson, Inez and Vinoodh and more in celebration of his award, but also to support the foundation — which supports youth projects for social good.

“He’s one of the most impactful designers in my career,” Rocha said of Gaultier. “In the early [Aughts] I had a chance to do an Irish dance down the runway at his show, which pushed my career into a different direction.

“I remember Jeremy Scott fangirling over him,” she added. “We were at Cannes amfAR and Jeremy was like, ‘I need to see him, I need to meet him.’ Meanwhile, he had met him 20-some years before, and had a picture he showed Jean Paul. [He said] ‘Look at me, this is me when I was a little boy and this is you.’ And Jean Paul was so cute, he was like, ‘Very cool. I don’t know what you want me to do with that information.’”

Gaultier, who will be celebrating 50 years in fashion in April 2020, said he’s preparing for a big party to ring in the milestone.

Although he couldn’t share too many details, he did hint that “It will be in the center of Paris, in a theater and it will be a big show and a big party in the evening.”

When Gaultier got on stage to accept his award from Rodgers, who was doubled over nearly crying, he hugged his old friend tightly.

He approached the mic, laughed, and said, “Emotion, emotion.”

Chanel Celebrates Women in Film With ‘Through Her Lens’

A Magical Evening for the Haas Brothers