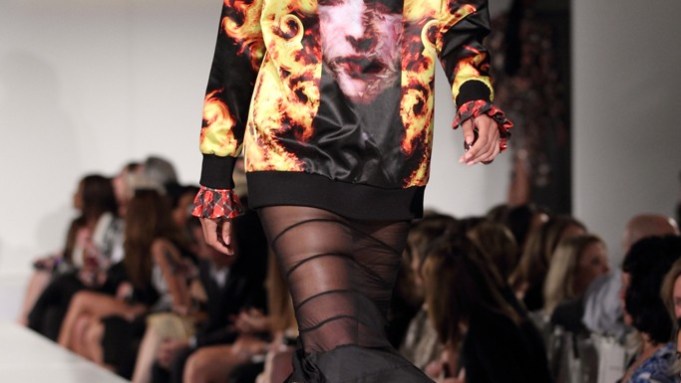 ATLANTA — Now in its 21st year, Jeffrey Fashion Cares featured edgy and classic looks for fall on the runway Monday evening from designers including Hedi Slimane for Saint Laurent Paris and Raf Simons for Christian Dior.

Speaking backstage before the show, Jeffrey Kalinsky said, “What makes the show so interesting is we highlight certain designers so you get to see the different personalities of each collection onstage.” Some of those featured designers included a group he described as “more emerging” — Simone Rocha, Erdem, Christopher Kane and Mary Katrantzou. Runway looks included see-through skirts, high-low dresses, high-heeled boots, very short skirts, lace and evening dresses in vivid jewel tones.

Of the trips and jewelry offered in the live auction, the Vogue trip for two during New York Fashion Week got the highest bid — $9,000. It includes lunch at the Condé Nast Café and tickets to Michael Kors’ show.

The event did not have a guest designer this year. Kalinsky, dressed in jeans and his trademark customized Nikes, explained that the guest designer concept was supposed to be for one year when Oscar de la Renta was invited on the 15th anniversary of Jeffrey Fashion Cares. Jason Wu was guest designer for two years (2010 and 2011), with Joseph Altuzarra following in 2012.

“I don’t know that I’ll ever do it again,” Kalinsky said. “What I’d like to do is have a celebrated person here to bring attention to the causes.…but I feel great relying on the fact that the evening and fashion show are fun — and we’re sold out.”

The Atlanta event raises money for the Atlanta AIDS Fund and Susan B. Komen for the Cure, Greater Atlanta Affiliate. It should raise between $600,000 and $800,000. Between the Atlanta and New York (held in April and featuring men’s fashions) events, Jeffrey Fashion Cares raises about $1.1 million each year now. About 90 percent goes to the charities.