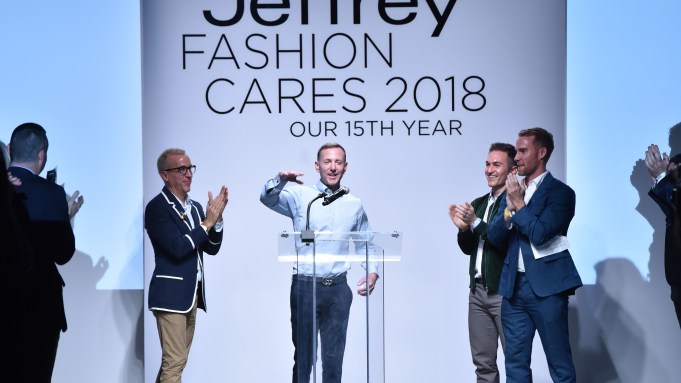 “It’s my first time coming here,” offered Serayah McNeill from inside the USS Intrepid aircraft carrier on Wednesday night. “I know it’s going to be a lot of hot guys. Right?”

The actress had arrived at the maritime museum, host to the annual Jeffrey Fashion Cares benefit fashion show and auction, with some accurate intel. Before sitting down to watch a slew of male models parade some of the season’s fashions, the crowd had plenty of time to eye the lineup of silent auction items sprinkled between the several bars.

“I’m here with my boys from ‘Queer Eye,’ and we’re here to represent. This is my first time,” said Tan France, the Netflix series’ fashion expert. “A lot of swimwear, apparently. A lot of Speedos, so that’s apparently the thing we should be looking out for,” he said when asked what sort of wares he was expecting to scope out later in the evening. “But I hear it’s a great cause, so I’m looking forward to being here for it.”

The event is a 100 percent volunteer effort, raising money for organizations benefiting the LGBTQ community; this year’s beneficiaries include the Elton John AIDS Foundation, Hetrick-Martin Institute and Lambda Legal.

“My very good friend, Scott Campbell, is the executive director of the Elton John AIDS Foundation, and he asked me if I’d be in town,” said event cohost Judith Light, dressed in a springy look she’d picked up earlier from the Jeffrey boutique. “And I said, ‘I will make it my business to be here.'” The evening also honored Army veteran Staff Sgt. Cathrine Schmid, one of the plaintiffs in a lawsuit contesting a recent ban against transgender people serving in the military. “Lambda Legal has brought the case against the Trump administration’s ban against transgender people serving in the military. What we’re talking about tonight  are organizations that really support the LGBTQ community,” Light stressed.

The origins of the event trace back to retailer Jeffrey Kalinsky, who started Fashion Cares in Atlanta 26 years ago before bringing it to New York 15 years ago.

“It started as an AIDS benefit, and no one was really doing much in that community in a major way to raise money for AIDS,” he said. “When I moved to New York — I’ll be honest, I was probably scared more than anything, intimidated — how you would do something like that here. I had a salesperson who was like a dog with a bone; he wanted me to have a men’s fashion show. I said I’d do it if it would be a charity benefit,” Kalinsky continued. “It’s all about trying to do a mitzvah, do some good.”

The hard work has paid off; over those 15 years, the New York event has raised a cumulative $6 million to $7 million.