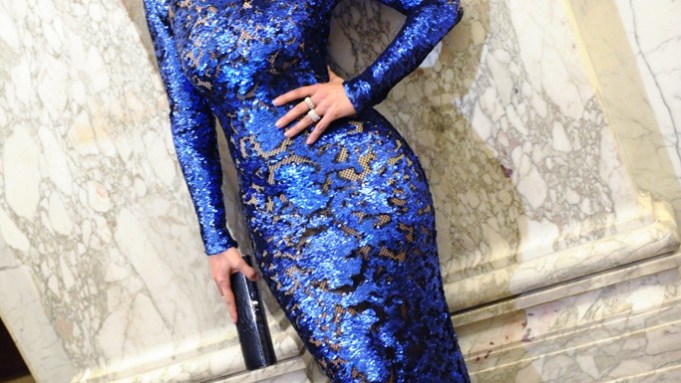 “I’m a good red carpet date. I know what I’m doing,” promised Jennifer Lopez, vamping onstage at amfAR’s Inspiration Gala at the Plaza hotel on Thursday in New York. The boast was meant to egg on the black-tie crowd bidding for a date night with the star to any of her upcoming engagements around the world. A flurry of hands rose as the price tag quickly advanced into five figures. “This date is going to be so much fun….If this gets to $100,000, I’m going to cry,” said Lopez, sheathed in sapphire blue Tom Ford sequins and a slicked-back ponytail.

After a fierce bidding war, Lopez agreed to go on two separate outings for $90,000 each, $180,000 in total — one with Dsquared2 designer Dan Caten and the other with a middle-aged financier sporting a curly mop of hair named Rudolph Younes. The latter’s wife, Irina Bas, a statuesque blonde with an accent, intercepted a reporter inquiring about the pricy date.

“I am Russian but I live in New York and I like a lot J.Lo,” she explained, adding that they would likely choose to go to Los Angeles to see the “Live It Up” singer receive a star on the Hollywood Walk of Fame on June 20.

“He may be one of the world’s chicest men — after Bowie,” said Iman, who is married to the rock icon.

The nearly five-hour program at the Plaza included a performance by Carly Rae Jepsen and a men’s military-themed runway show. “Who knew camouflage was so sexy? No wonder people join the military,” said Uma Thurman appreciatively of the cavalcade of skin-revealing, non-regulation designs.