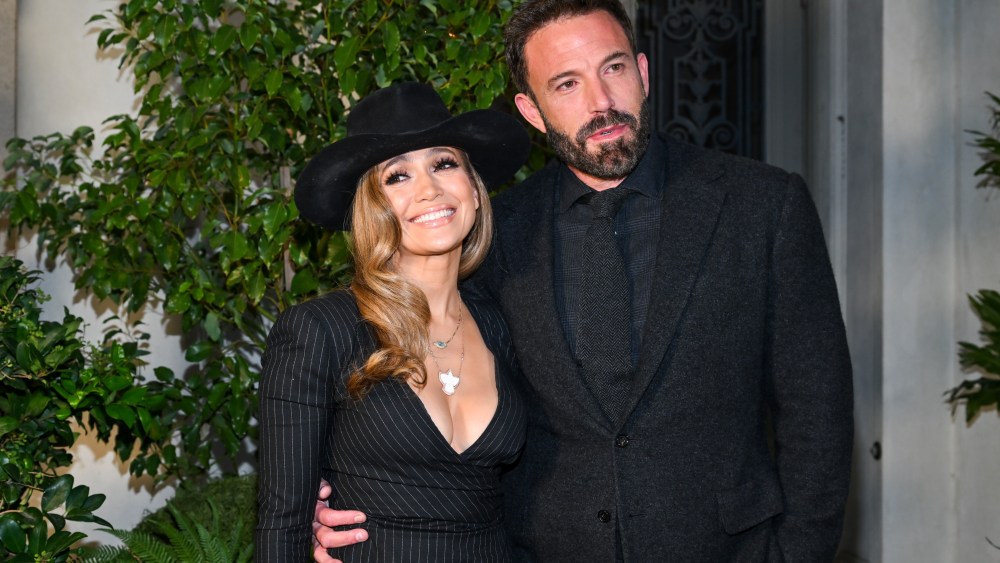 Eyes were on newly married Jennifer Lopez and Ben Affleck when the couple arrived.

“Ralph did our wedding, so we’ve become quite close,” Lopez told reporters of her custom Ralph Lauren Collection gown, with Affleck standing nearby.

For the show, she had on a cowboy hat and a low-cut, figure-hugging pinstripe evening dress. It’s the Milanese-inspired “Alvita” from pre-fall 2022, retailing for $3,290.

“We really love his aesthetic,” she continued, in the open air at a makeshift backstage area and photo call. “We’re excited to see what he’s doing tonight. I can see a little bit behind you right now.”

She was noticing the models, lined up and ready to go. “They’re filing in,” she said. “I get a sneak peek.”

Lily Collins, too, reflected on her Ralph Lauren wedding gown, a long-sleeved, hooded lace design. The brand and designer will forever be “special and important” to her and her husband, filmmaker Charlie McDowell, she said.

“He is just an Americana icon,” she added, echoing many of the guests.

“He has remained the most classic American designer,” said Robin Wright, who arrived with daughter Dylan Penn. “And he fits. I just love the way everything fits.”

“Nothing ever goes out of style,” Penn chimed in.

“It’s very authentic, well-made and crafted pieces that are fully integrated into not only Western wear just stylistically, but also functionally,” he said, with girlfriend and model Ari Fournier by his side.

“I’m an equestrian and grew up on a farm, so I always wore Ralph Lauren in my life,” she said. “And Cole is an all-American man.”

“It’s got a bit of a Johnny Cash thing going on, the all-black California cowboy,” he said of his look.

What was his reaction to Lauren showing in The Golden State for the first time?

For John Legend, it was a longer ride.

“He brought us out to Pasadena,” the singer-songwriter said with a laugh. (It was, in fact, San Marino, California.)

“It’s a bit of a trek,” he went on. “But it’s very exciting to be here. He’s been such an iconic designer for so long and has made so many classic designs. I’m excited to celebrate his work tonight.”

It was his first time seeing The Huntington Library, Art Museum and Botanical Gardens. “I’ve never been here,” he said.

Such was the case for many — but not Laura Dern. A Los Angeles native, she’s visited its art and landscape through the years.

“I grew up around, because of them, this amazing home of Ralph Lauren,” Dern said.

“They gave me a little bit of a hint about it over the summer, and I was like ‘No!’” Zoe said of Lauren presenting in California. “I just thought they were going to do an event or baby, little presentation. But why would I think that? They don’t do anything small.”