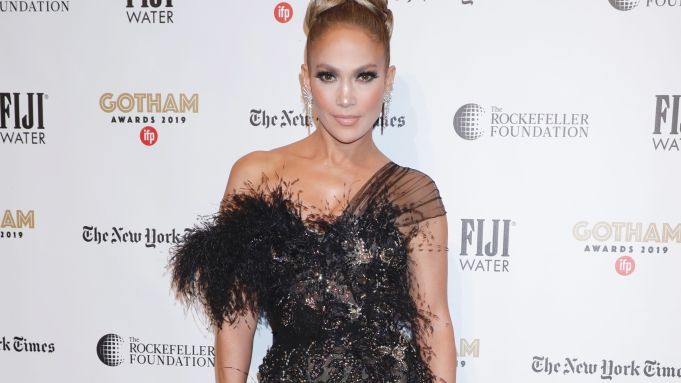 There were rumblings that Jennifer Lopez would show up to the IFP Gotham Awards in New York on Monday night.

The actress and singer had been in town doing this upcoming weekend’s episode of “Saturday Night Live” — so the seeds of her arrival were planted early on. Then she stoked the rumors by posting a photograph of herself in a feathered Ralph & Russo dress and diamond earrings on Instagram, her hair rolled into a Baroque updo.

Sure enough — a couple hours after the red carpet opened for guests including Ava DuVernay, Uma Thurman, Awkwafina, Adam Driver and Greta Gerwig — J. Lo came through. Phones went up, lights started flashing and those who were upstairs having cocktails stood on the balcony craning to get a look.

The star power of the other celebrities was not dimmed by Lopez’s appearance — Olivia Wilde, Willem Dafoe, Elisabeth Moss, Adam Sandler and more also walked the carpet, taking photographs and saying hello to one another.

Among the more seasoned actors were newcomers such as Archie Yates from “Jojo Rabbit,” Kelvin Harrison Jr. from “Waves” and Noah Jupe, who starred opposite Shia LaBeouf in “Honey Boy.”

Jupe said he didn’t know who LaBeouf was prior to meeting him for the role. He was unaware of the “Nymphomaniac” actor’s cult status, and didn’t know about his fashion antics and reputation for being an eccentric.

“We started the project, and I started watching ‘Even Stevens,’” Jupe said. “I must have binged all of however many seasons there were in two weeks. And then I went onto ‘Holes’ and ‘The Battle of Shaker Heights,’ and I went through his life in movies. Now I’m a huge fan of his. From what I saw in his performances, he’s a real truth-seeker.”

Harrison Jr., meanwhile, danced his way down the red carpet — following the advice of his “Waves” costar Sterling K. Brown.

“He tells me just to have fun,” Harrison Jr. said. “He’s always been like, ‘You take it too seriously, dude. It’s not brain surgery. I know you really care about this and that’s beautiful, but if we’re not having fun, then what are we doing?’”

Aside from J. Lo, Netflix and “Marriage Story” were the undisputed champs of the night; The film cleaned up, taking the best screenplay, best actor, film audience and best feature film spots, and the streaming and production service was well-represented in the room. DuVernay, Laura Dern, the “Uncut Gems” directors Josh and Benny Safdie, and Driver shouted Netflix out in their acceptance speeches. Its original films “American Factory” and series “When They See Us” both won as well.

DuVernay, who received honorary achievement awards alongside Dern, Sam Rockwell and Glen Basner, said she remembered the first time she was able to make a film exactly the way she wanted — because she was paying for it.

“The last time that happened was with Netflix, on ‘The 13th’ and ‘When They See Us,’” she said. The director also recounted in her acceptance speech a few pieces of advice she gave to a rising filmmaker that she herself revisits from time to time.

“Know your crew by name. Treat everyone the same. Change your socks at lunch. You’ll be a new woman, I promise,” she said. “Hydrate and moisturize throughout the day. Remind yourself why you’re telling the story every single day.”

Lopez applauded DuVernay, smiling as she sat to dinner with her fiancé Alex Rodriguez. He skipped the red carpet altogether, but remained by Lopez’s side for the awards ceremony. At the end of the evening, she wound her way to the exit, where a handful of brave paparazzi stood in the snowy conditions to photograph her.