The actress shed some light on her personal life at MoMA on Wednesday. 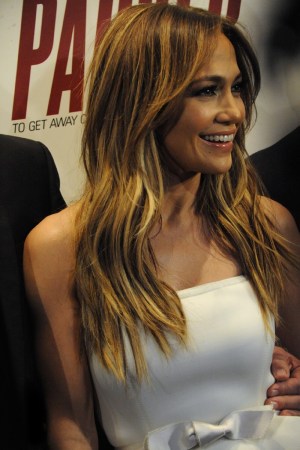 Despite the frigid New York City temperatures, Jennifer Lopez looked radiant at a Wednesday night screening of her new movie, “Parker,” hosted by The Cinema Society and L’Oréal Paris. The sun-kissed star, who wore a strapless cream-colored Lanvin dress and carried a Tom Ford bag, spoke frankly on the red carpet, revealing that the movie provided an outlet during a time in her life when “it was hard to get out of bed.”

“She [Lopez’s character, Leslie Rodgers] was going through the worst moment in her life, and it just so happened that by the time we started filming I was kind of feeling the same way,” said Lopez, who split with husband Marc Anthony last spring. “I was going through one of the hardest moments in my life with my separation and with the kids and everything, and it was very difficult. In front of kids and at work you have to be so professional and you have to be so up for your children in that moment. I was lucky to be able to be in front of the cameras and act exactly how I felt. So it was a blessing.”

These days Lopez is busy working on her 10th album and a number of production projects and will soon be traveling the world on tour. She is also planning a themed birthday bash for her twins, Max and Emme, who turn five in February. “They want a rainbow party,” she said. “Lots of rainbow stuff. [It will be] very colorful.”

The screening, which was held at the Museum of Modern Art, drew stars from the film; director Taylor Hackford; Emma Booth, in Tome; Micah Hauptman, and actress-singer Patti LuPone, who plays Lopez’s mother in the movie.

Jason Statham, who wore a dark Anderson & Sheppard suit, said that filming a thriller is nothing new, adding that working with Lopez was one of the highlights. “We had good chemistry. It was there,” he said.

The after party was held at the recently reopened Marquee nightclub, where partygoers sipped on Appleton Estate cocktails, aptly named Parker and Palm Beach, a nod to the film’s locale.